Kate and Gerry McCann slept in separate beds after an argument during their family holiday, the police files revealed.

Mrs McCann stayed in her children's room the night before Madeleine's disappearance because she was upset that her husband had 'ignored' her at dinner.

But she said she was not sure Mr McCann even noticed her absence. In his police statement he said he thought she had moved because he was snoring. 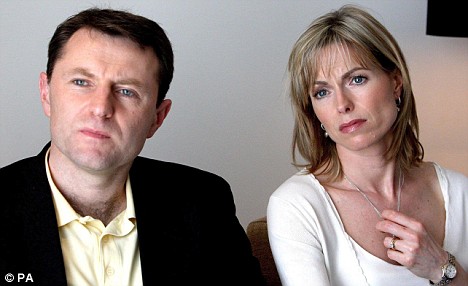 Row: Kate McCann slept in the children's bedroom the night before Madeleine vanished after an argument with husband, Gerry
The detail in the massive police file reveals how ordinary the McCanns' Portugal holiday was until the terrible events of May 3, when Madeleine vanished.

Like any parents with a young family, the McCanns occasionally argued and snapped at each other.

Mrs McCann's witness statement from September 6 last year – the day before she was made a formal suspect – records how police asked if she had ever slept in her daughter's bedroom.

She confirmed it had happened once, on the night of May 2, after an argument.

The statement reads: 'Asked if she ever slept in Madeleine's room, she said it happened on Wednesday because she had fallen out with Gerry after he ignored her after dinner when they went to the tapas bar.

'She decided to retaliate by sleeping in another room in the bed near the window.

'She does not know whether Gerry was aware that she slept in the other room as he was already asleep when she left. If her husband was aware of this situation, he did not comment on it.' 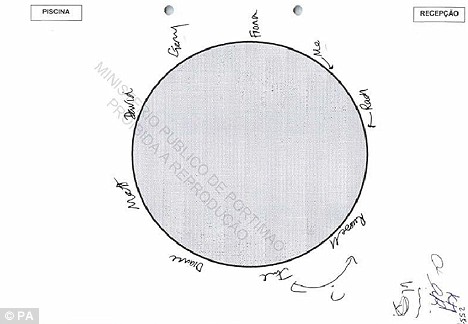 Seating: A table plan drawn by Kate McCann shows where the McCanns and their friends were sitting at dinner on the night Madeleine vanished


Mrs McCann also told police that Madeleine slept in her parents' room on May 1, but did not say why.

McCann spokesman Clarence Mitchell refused to comment on the contents of the witness statement.
The police files also reveal the couple did not sit next to each other at dinner on the night Madeleine vanished.
Mrs McCann drew a plan showing where the McCanns and their friends were sitting at the tapas restaurant at the Ocean Club resort in Praia da Luz on May 3 last year.
The diagram shows that Fiona Payne sat between the couple.
The friends on holiday with the McCanns when Madeleine went missing - who have become known as the 'Tapas Seven' - were crucial to the investigation.
They were moving around the Ocean Club complex throughout the evening checking on their children.
One of the seven, Jane Tanner, believes she saw Madeleine being abducted but did not realise it at the time.
The other people dining with the McCanns that night were Rachael and Matthew Oldfield, Ms Tanner's partner Russell O'Brien and Mrs Payne's husband David and her mother Dianne Webster.
Another image from the files shows an aerial shot of the trail followed by sniffer dogs searching for Madeleine and where it ran cold.
Mr and Mrs McCann alway strenuously denied any involvement in her disappearance. Portuguese prosecutors shelved the case and formally cleared them on July 21.

Re: McCanns rowed and slept in separate rooms the night before Madeleine vanished

Thanks CF it's the first time I've seen on this forum "THE BIG ROUND TABLE" anyway if you forget that it's a textusa blog, this link is a good read and quite funny as well given the subject matter.....