The "number 1 suspect" Christian B 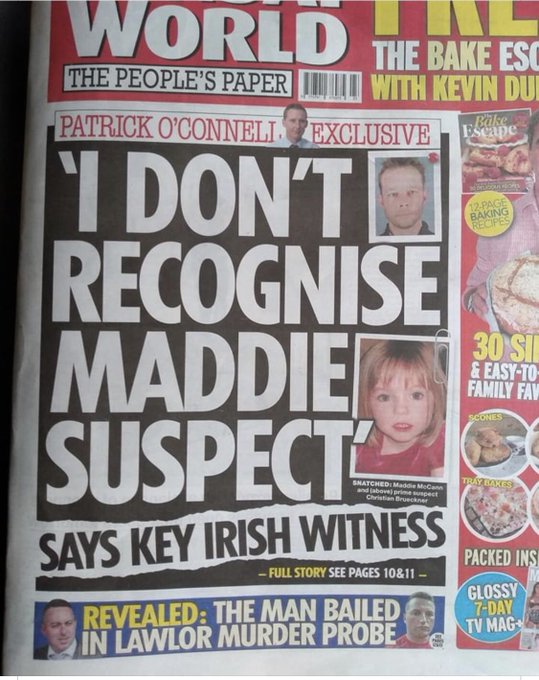 Not sure if the full story to this article was ever linked to on here but Martin Smith says "No". What is interesting is that this is the first time MS has been quoted directly on his experience for years and.... he's sticking to his original statements.

Former business executive Martin Smith and his family made a statement to cops saying they saw a man carrying a young pyjama-clad girl the night the toddler vanished in 2007.

Martin, his wife and two kids were holidaying in Portugal at the same time as the McCanns and claim they saw a man aged around 35 to 40 with a youngster in pink and white PJs down a quiet street around 150m from the beach near the complex where Maddie was staying.

Irishman Martin, made a statement along with his wife Mary, daughter Aoife and son Peter saying the man they saw was Caucasian and around 5ft 7in to 5ft 9in in height.

But when asked if Christian B fitted the man he saw, Martin told the Sunday World: “I cannot add to the statement I gave police six years ago. This all happened 13 years ago.


“I have seen the pictures and coverage this week (of Christian B) but everything I could say I said in my statement to police. I don’t recognise this man.”

Martin added he has not heard from German investigators and officers from the Met had not been touch.

The reported sighting by the Smiths was at around 10pm on May 3, 2007 and was later labelled ‘The Smith Sighting’.


It was less than 300 metres from the resort where the McCanns were staying and the man was heading to the beach 150 metres away.

Martin and family members who were interviewed stated that they went to bar before leaving at around 10pm.

As the group made their way back to their apartment, several noticed a man walking down the middle of the street, Rua 25 de Abril, carrying a girl, about three or four years old.

The child seen had blonde hair, according to descriptions given, and her skin was very fair.

At the time, the family thought little about it, and headed home the following day.

At the time, local officers were focused on another sighting of a man near Kate and Gerry McCann’s holiday apartment .

Martin and his family’s e-fit was compiled by private detectives in September 2008.


In 2012 Detective Chief Inspector Andy Redwood from the Met said for years the Smiths’ sighting had been seen as “wrong place, wrong time” by investigators and was deemed unimportant.

But now Christin B has been identified as a prime suspect in Maddie’s disappearance, it is likely Martin may be interviewed again by authorities.

It has now emerged Christian B left Portugal days after Madeleine McCann vanished on May 3, 2007, to set up an illegal drugs network.

A European Arrest Warrant revealed he fled back to Germany to sell cannabis bought with cash and gems stolen on the Algarve.


He was known to be driving a vehicle matching the description of his Tiffin Allegro motorhome  when Madeleine disappeared.

Christian B is serving time for drugs charges but has applied to be released early after completing two-thirds of his sentence.

Thanks for that; we don't seem to have a link to the story already.

Not a very informative article!

Just been doing a bit of lazy reading through my notes. Interesting story here, from 20/12/2007.

Detectives have begun the process of contacting up to 1,000 locals whose records or mobile signals show they were in Praia da Luz on the night of May 3.

Officers are particularly interested in the time between 9.30pm and 10pm, when they believe Madeleine disappeared.

One resident said two detectives visited her on Tuesday, armed with two sheets of paper containing hundreds of numbers.

They asked her to confirm her mobile number and then asked her who she had called at 9.50pm on May 3.

She identified the number as her husband's mobile and said the officers told her: "We are investigating all calls made within Praia da Luz from 9.30pm onwards on May 3."

Not a very informative article!

So people who knew him are to be questioned. Wouldn't it be a better idea to question the man himself?!

A programme coming up on Discovery Plus for those who have it.

Interesting that Pat thinks GM would have hidden body on his own. I think she means without the T7 knowing anything about it.
_________________
The constant assertion of belief is an indication of fear.
Jiddu Krishnamurti