Pat Brown calls it a day.

Resistor wrote:
She should STFU until she knows what she is talking about, then.

Wonder if she thinks the same of your opinion.

The difference being, I do know what I am talking about.  In this aspect, anyway.

She has every right to comment, same as you or I resistor. Why should she shut up. We are discussing here on an open forum, she can write her blogs. As it happens I respect her and although sometimes I don't entirely agree with her, doesn't mean I would tell her to STFU........


Making Something out of Absolutely Nothing: Why Civilian Juries Fail 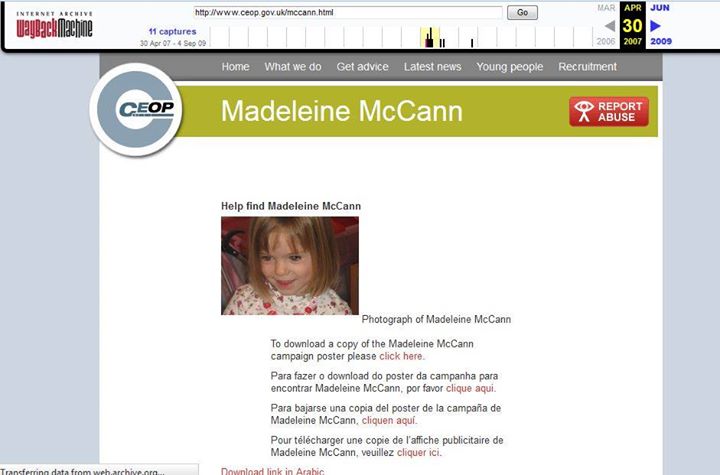 The other day I received a notice to serve on a jury in my county. I sent it back with a note in the section that allows a person to give a reason why they shouldn't have to. I wrote that I refuse to serve because I do not believe in the jury system that we have in the United States, that I won't serve with a gaggle of untrained citizens who have no background in crime scene analysis or behavioral analysis, who do not have any experience in making deductions in a scientific manner, to make a life and death decision with a group of people, well-meaning though they might be, who pretty much just got picked randomly off a bus stop to be criminal profilers for the day or weeks on end.


Recently, in the Madeleine McCann case comes a prime example of what kind of thing can go on in the minds of a jury. Someone checked the Wayback Machine, an Internet thing that allows you to check what happened on a particular day on the Internet in the past and they came up with a page labeled April 30th with an announcement by the governmental agency, CEOP - The Child Exploitation and Online Protection Centre (CEOP) is a command of the UK's National Crime Agency (NCA) - of Madeleine McCann's disappearance. All hell has broken loose on the Internet....many, including some folks who have written books and made films on the case....are claiming this is unquestionable proof that Madeleine McCann did not die or disappear on May 3rd, the date Kate McCann claimed she found her daughter missing after doing a check on her children, but, instead Madeleine was already gone days before which therefore proves that there is some huge conspiracy afoot which includes the government and a gaggle of accomplices, a conspiracy in which some shady super powerful people did something to Madeleine McCann and then had the McCanns and their friends (and other possible accomplices) carried on a hoax for days in Praia da Luz, pretending Maddie was alive until May 3rd at which point they staged a really pitiful fake abduction so that all would think that she disappeared on that date and not that something happened to her days earlier! In spite of all the "proof" folks have been batting about - a "fake" last photo and "forged" creche records, stuff that some think proves Madeleine was already dead and gone by May 3rd - NOW there is DEFINITIVE proof with this April 30th CEOP page that Madeleine did not die or disappear on May 3rd and the government clearly is involved with some incredibly big hoax with the McCanns in the disappearance of Madeleine McCann. Oh my god, I have a really bad headache.


Clearly, there is just a glitch on the Wayback site because it just makes no damn sense. Common sense - which seems to be missing in this case - should tell anyone that the government is not going to accidentally put up a webpage that a child is missing three days before the parents report her missing to the police. If a conspiracy is SO big that the government is in on the disappearance, they are hardly going to do something so incredibly stupid. The whole idea just makes my head hurt and want to slam it into a wall. And this comes from a person who DOES believe there is evidence to support a theory that Madeleine came to an accidental death in the vacation flat and the McCanns did false report and cover up her death.


But, this is the whole point as to why I want the civilian jury system to end in the United States. Juries can be manipulated and confused by attorneys, both defense and prosecution, into thinking some of the most ridiculous things which then allows them to either convict an innocent person or let off someone who is guilty as hell. Instead of using scientific, objective deduction, they get carried away with some scenario and can't recover. In the case of O.J. Simpson, "if the glove doesn't fit, you must acquit" allowed the jury to override massive evidence of guilt in spite of the fact the whole glove thing was just a silly lawyer trick. In the Casey Anthony case, Jose Baez got the jury to ignore a pile of evidence which hands down proved Casey Anthony guilty simply by suggesting her Daddy might have sexually abused Casey and had some hand in what happened to little Caylee. This ignited some kind of highly improbable scenario in the heads of the jury and, in spite of the fact no such evidence existed that any such scenario occurred and, in spite of the fact there was overwhelming evidence - both physical and behavioral - that Casey Anthony premeditatedly murdered her daughter, the jury found her not guilty. This was the day I lost total faith in the civilian jury system and realized just how ridiculous it is to put completely untrained people into a room with highly trained lawyers and expect they can do the job. The only reason it seems to work most of the time is because most cases that go to trial are slam dunks with clearly guilty people; this is why prosecutors can have such high convictions rates.


Can one imagine being on a jury now trying to decipher what happened to Madeleine McCann and having the jury believe that the government put out a webpage looking for a missing child prior to anyone knowing she had gone missing? Oh, god, I would be sitting in that jury room with my head on the table, crying. And, I would be the lone holdout for days while the other jury members tried to convince me of this nonsense until finally there was a hung jury because I refused to believe in the most ridiculous conspiracy theory ever.


I am not saying professionals are always right, but at least we ought to try to stick with analyzing the evidence as properly and scientifically as we can and no one should be arrested and prosecuted and convicted without having professionals be a methodical and logical as possible, making sure they don't take one weird or confusing element and spinning it out of reason until they make it fit some theory they have, ignoring all of evidence to the contrary. We could either hire already properly trained professionals for the jury or we could actually have a degree to become a professional juror, but we need to find a way to make sure that the jurors in the box actually have the knowledge and experience to properly evaluate evidence.

The civilian jury system needs to be dismantled and a proper professional jury system set up in its place. It still won't be perfect but at least we can have a far better shot at jury members understanding evidence and not getting swept away by some snake oil salesman attorney's attempt to win his case by confusing and winning over a bunch of people who have no more knowledge of analyzing criminal evidence than they do of how to fix rocket engines. Civilian juries are a crazy idea and why they still exist boggles my mind; I guess because lawyers like it that way.

Resistor wrote:
She should STFU until she knows what she is talking about, then.

Wonder if she thinks the same of your opinion.

The difference being, I do know what I am talking about.  In this aspect, anyway.

She has every right to comment, same as you or I resistor.  Why should she shut up.  We are discussing here on an open forum, she can write her blogs.  As it happens  I respect her and although sometimes I don't entirely agree with her, doesn't mean I would tell her to STFU........

What is the point of saying such a thing, if we all STFU no one would comment here, not many are 'experts' yet we all comment.

Sorry Candy, you are absolutely right. I have had two days now of trying to explain this to people and I'm getting nowhere. It seems that anyone who has ever sent an email has an opinion, and most of them are talking absolute rubbish. Pat Brown has dismissed the whole thing as "nonsense" because it might upset her pet theory, she clearly hasn't taken any technical advice and my last remaining bit of respect for her has just gone whoosh straight out the window. I don't wade in and tell her how to write profiles, so it's very rude and unprofessional of her to dismiss the technical opinions of a lot of knowledgeable people as "nonsense".

I look forward to court cases in the US where they can happily proclaim that according to the famous criminal profiler it's nothing to worry about (evidence from Wayback) it was a glitch. Notice she has no attempt at explaining how this glitch would come about other than good old common sense. She has actually done exactly the same thing as she is complaining about, she's not qualified to be 'on the jury' making the judgement on the Wayback 'glitch' which equates to her people at the bus stop, she's one of them.

What Pat forgets is Kate, Gerry the T9 and I suppose good ol Jim-Gamble that is-are ALL professionals. To be honest I would rather my chances with 12 honest and true ordinary joes. Think Pat is spending too much time in the stratosphere, professionals have a place but they are as easily corrupted and misled or just plain wrong as any of us!
_________________
Success is not final, failure is not fatal: it is the courage to continue that counts
Winston Churchill