This may not be the correct place for this but, goodness isn't the news dreadful at present.   Judges, Police Superintendents :

The Hillsborough police match commander has agreed his failure to close a tunnel "was the direct cause of the deaths of 96 people".

David Duckenfield also accepted he "froze" during the afternoon of the 1989 football disaster.

Mr Duckenfield was giving evidence for a sixth day at the new Hillsborough inquests in Warrington, Cheshire.

He was being questioned by Paul Greaney QC on behalf of the Police Federation of England and Wales.

Mr Duckenfield, now 70, had earlier denied claims he "bottled it" and "panicked" as the disaster unfolded.

'Under pressure'
The jury was told the former chief superintendent had at least three minutes to "consider the consequences" of opening an exit gate at the stadium, as a crowd of fans built up outside.

Mr Greaney suggested a child of "average intelligence" could have realised what would happen when the gate, which allowed up to 2,000 fans to enter, was opened.

But Mr Duckenfield said he did "not think of it on the day" because of the pressure he was under.

An absolute disgrace,too much swept under the carpet. Would we be where we are today if it wasn't without the relentless efforts of the campaigners. I don't think so.

I'm sorry, but ... which one of you would have taken the right decision within minutes.
It's not the police IMO, but the alcohol fulled hooligans, who created a disaster.
The real problem, IMO again, is that at that time no one was taking or could take responsibility for something so difficult to oversee.
As has happened many times and again at major occasions. Remember e.g.the disaster at a fest at Duisburg...?

Rather than a copper taking blame...i'd rather they were asked"who authorised the lies to the sun newspaper and how high up did orders come from to cover up what happened ie taylor report,no safety certificate issued for hillsborough due to previous problems at leppings road end". All the rest is extraneous information imo

The jury is now out at the Hillsborough inquests.

96 football fans who died in 1989 disaster WERE unlawfully killed

BREAKING NEWS: Tears of joy for Hillsborough families as jury rules the 96 football fans who died in 1989 disaster WERE unlawfully killed - and police WERE to blame for the deadly crush

Good news to hear the families are finally vindicated, and those responsible may now face justice.  Sooner or later justice always comes.
_________________

Pleased the truth is out and the families have justice. I'm massive Arsenal fan but footy fans are united on this one. 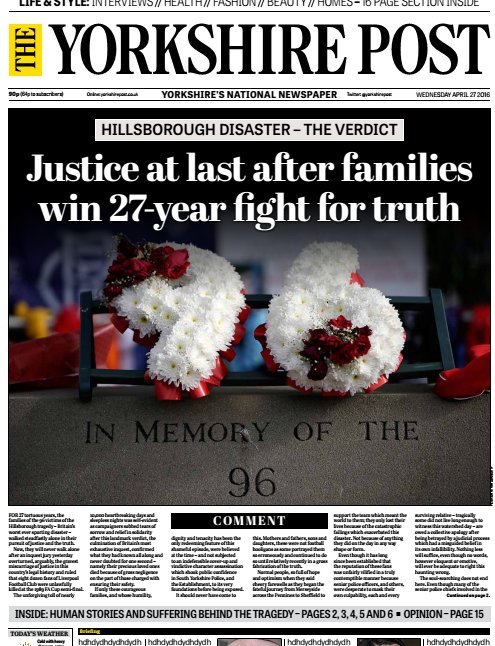 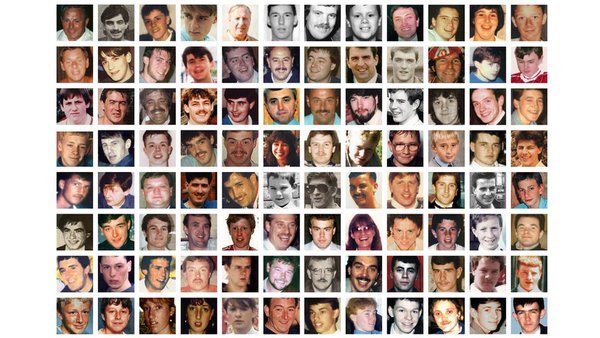 Hillsborough is an in-depth, moving account of Britain's worst sporting disaster, in which 96 men, women and children were killed, hundreds injured and thousands traumatised. Beginning with that fateful day, 15 April 1989, the film details the horror of the tragedy, told through the experiences of those directly involved: fans, survivors, family members and police officers. Many speak publicly for the first time.
It captures the horror of the crush on the terraces, revealing the prejudices held by the police towards football fans. It exposes the police commanders' abject failure in leadership as the tragedy unfolded, and their deceit and determination to deflect responsibility for their failures in crowd management onto those who survived.
The documentary exposes the lack of dignity shown to bereaved families as they arrived in Sheffield to identify their loved ones laid out in body bags on a gymnasium floor. It considers the impact of the orchestrated vilification of fans in the media and, as a consequence, their public condemnation. By interviewing those involved, it recounts the 27-year campaign for justice fought on behalf of the 96 who died.

I will have to work up the courage to watch this. Like a lot of you here, I remember watching the tragedy as it unfolded and, whilst I obviously felt deep sorrow for the victims and families, I am ashamed to say I believed the msm version of where the blame might lie.
My excuse is I was a busy mother. I watched the news and read the papers, then life moved on . There had been football riots and hooliganism aplenty in the past.
Tragedies happen once in a while which touch our lives. Our next door neighbours lost a nephew in the Ibrox disaster, A friend had just been on the Herald of free Enterprise 2 weeks before it sank and 11 of my American colleagues died on 9/11.
In my lifetime, there have been many such events, Piper Alpha, Bradford City fire, Heyschell, and in almost every case human error was to blame. But often evil has been at the heart of the loss of life. A bad decision was made that day which had tragic consequences. That is something I can feel some sympathy for. What is unforgivable, are the lies and smears visited upon 96 people who had their memory trashed to cover for that error of judgement. And the British press should think black burning shame on themselves for perpetuating the myth.
Rarely have people fought so long, and so bravely to clear their loved ones names. They did it with dignity and courage in the face of huge obstacles.
We should all watch the film to remind ourselves that sometimes good can prevail.
_________________
Everything I write is my own opinion. Nothing stated as fact.

Admirable.  So good to have people with principles, great example to others.

The author, who led the Hillsborough Independent Panel's research team, said he could not receive an honour in protest "at those who remained unresponsive" to help families and survivors affected by the disaster.
Ninety-six people died following a crush at Hillsborough on 15 April 1989.
In April, an inquest jury concluded the fans were unlawfully killed.

I was reading about this before. Very admirable indeed.

And then you get this absolute crock:

What's all that about. Posh spice getting an OBE....

I hope she gets it rescinded for not keeping her trap shut and bragging about it.

(sorry to hijack your thread with this garbage)

Posh Spice getting an OBE

bluebell wrote:Admirable.  So good to have people with principles, great example to others.

The author, who led the Hillsborough Independent Panel's research team, said he could not receive an honour in protest "at those who remained unresponsive" to help families and survivors affected by the disaster.
Ninety-six people died following a crush at Hillsborough on 15 April 1989.
In April, an inquest jury concluded the fans were unlawfully killed.

Jolly good. All the best people refuse these silly honours. Why does Queenie hand them out, as if she`s someone special that can bestow an honour on someone.
_________________
The constant assertion of belief is an indication of fear.
Jiddu Krishnamurti

They had no choice than to prosecute these men. Not for the tragic errors that were made on that day but for the lies and cover up that ensued and the smearing of all that was left of the ones who died; their good name.
_________________
Everything I write is my own opinion. Nothing stated as fact.

That is why Grange can't be a cover up.

Heisenburg wrote:That is why Grange can't be a cover up.

Can any trial after all this time be fair?

How could anyone remember exactly what happened after all this time? Or who said what?

At the time there were allegations that the police actually destroyed witness statements, I am not sure whether that is true, but if it was, is it possible to rely on memory? 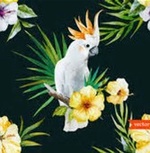 There must be documents not seen in the inquests,the CPS only go to court I believe where there is a fair chance of a prosecution.

I don't think the CPS would take this one further unless they were absolutely convinced they had all the evidence in place to successfully prosecute the named individuals..