LONDON (Reuters) - Madeleine McCann went missing on May 3, 2007, while on holiday in southern Portugal with her parents Gerry and Kate. 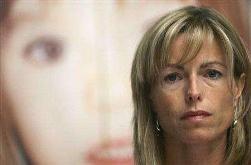 Kate McCann is pictured in file photo. Her daughter Madeleine disappeared in southern Portugal on May 3, 2007. REUTERS

Here is a selection of quotes from the case:

“The front door was open, the window had been tampered with, the shutters had been jemmied open and Madeleine was missing.”

“Please, if you have Madeleine, let her come back to mummy, daddy and her brother and sister.”

“I can’t imagine what they are experiencing, probably pain without measure. I want to assure them that the professionals are doing the best they can.”
- Chief Inspector Olegario Sousa speaks to reporters.

“They felt their children were safe. They were maybe lulled into a false sense of security.”
Kate McCann’s mother, Susan Healy, defends their decision to leave their children to sleep alone.

“There’s absolutely no way Kate and I are involved in this abduction.”
- A month after Madeleine went missing, Gerry McCann comments for the first time on speculation about their role.

“In the past few days there have been some developments and clues that have been found that could point to the possible death of this child.”
- Sousa confirms that police think Madeleine may be dead.

“Despite there being so much we wish to say, we are unable to do so, except to say this: we have played no part in the disappearance of our lovely daughter Madeleine.”
- Gerry McCann speaks out after flying back to England.

“I’ve been a detective at the most senior level for 30 years and have never seen such a witch-hunt, or one based on such flimsy evidence.”
- Ex-London police chief Lord Stevens defends the McCanns.

“There was a certain hastiness.”
- The head of Portugal’s police Alipio Ribeiro says detectives were too quick to name the parents as suspects.

“While we were having breakfast, Maddie said ‘Mummy why didn’t you come when we were crying last night?'.”
- A police statement made by Kate McCann is leaked to a Spanish TV station.

Re: In quotes: The Madeleine McCann case