The murder of Meredith Kercher

The murder of Meredith Kercher

I found the following article interesting and relevant in light of recent events:

I won't paste it because it's too long but if you don't click links google "Amanda Knox FOA FBI" and the justice4ever website should be at the top of the results.

In a nutshell, the Friends of Amanda (the FOA) are using similar propaganda to the pro-McCanns to the extent that they cite the McCanns as victims of the same kind of sickos and label anyone who questions Knox's innocence as "haters" & "trolls"

And you haven't, your comparison of the political fog is spot on.

In (social) media terms the victim gets rubbed out of the picture pretty swiftly.

1 picture of Meredith
next to
4 pictures of Amanda Knox

Meredith Kercher: Knox and Sollecito court ruling due in Italy


Italy's top court is expected to decide whether to uphold the convictions of Amanda Knox and Raffaele Sollecito for the 2007 murder of British student Meredith Kercher.
The Court of Cassation in Rome will hear from Sollecito's defence team before the judges give their verdict.
Former lovers Knox and Sollecito were convicted for the second time in 2014.
They have maintained their innocence throughout and have already served four years in prison.
Earlier this week, the court heard Knox's lawyer's arguments that her conviction was a grave judicial error.

The verdict was originally due on Wednesday but was delayed to hear Sollecito's defence team.
The court will either confirm the guilty verdict or overturn it - by ordering another trial or effectively bringing about an acquittal.
A definitive conviction would trigger complicated attempts to extradite Knox, who currently lives in Seattle in the US.
Sollecito, from Bari, southern Italy, has remained in the country, and attended the court with his current girlfriend on Wednesday.
The Kercher family's lawyer, Francesco Maresca, expressed hopes at the last hearing that the court's decision would bring an end to the judicial process.
"They hope that this will be the final stage of this judicial process and they will at last... be able to remember Meredith outside of the court room [process]", he said.
Profile: Meredith Kercher 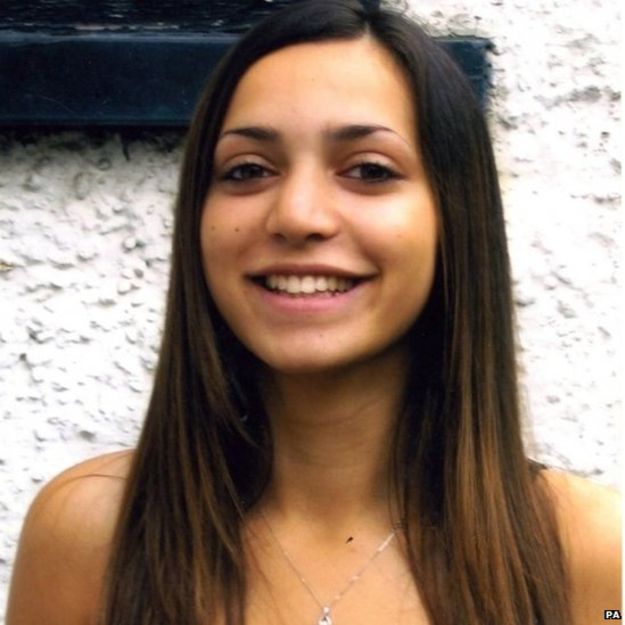 Meredith Kercher, 21, was found with her throat cut
Leeds University student Meredith Kercher, 21, from Coulsdon, south London, was found dead in the flat she shared with Knox, now 27, in Perugia, central Italy, where both women were studying.
Her partially-clothed body was found under a duvet in her bedroom, which had been locked from the inside. Her throat had been cut.
Prosecutors claimed she was killed as part of a bungled sex game. Knox and Sollecito, 30, were convicted of the murder by a trial court in Perugia in 2009.
They were freed in 2011 after an appellate court overturned the convictions.
Profile: The two faces of Amanda Knox
Profile: Raffaele Sollecito 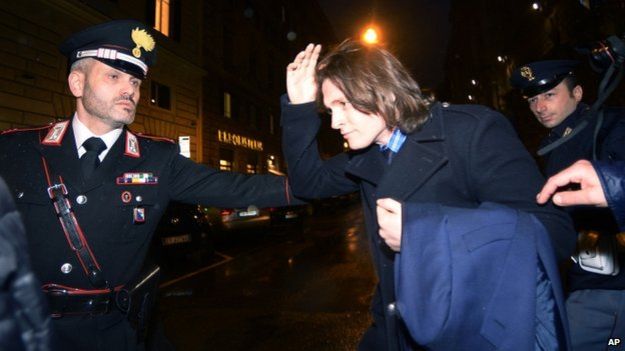 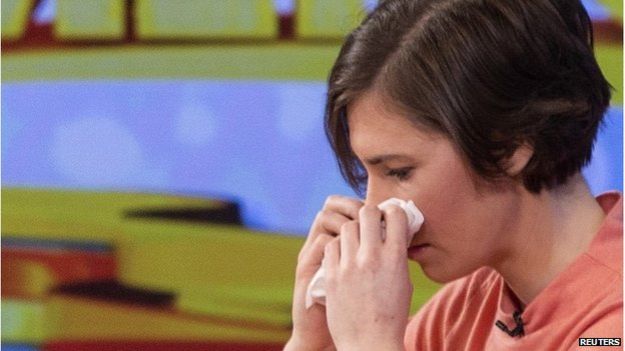 Amanda Knox, who appeared on American TV last year, could face extradition
The Court of Cassation rebuked the appellate judge's reasoning and last year an appeals court in Florence sentenced Knox to 28 years and Sollecito to 25 years.
Rudy Hermann Guede, born in the Ivory Coast, who opted for a fast-track trial, is serving a 16-year sentence for his role in the murder.
The high-profile case has inspired books and at least two films, and Kercher's family has said Meredith, the real victim, risked being forgotten.
Originally portrayed as a fast-living partygoer, Knox came to be seen in much of her home country as a victim of a botched investigation and an unwieldy justice system. 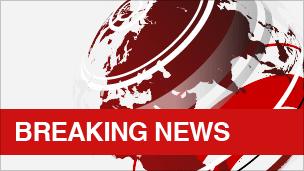 Some of the same shills on Twitter who aggressively defend the McCanns, also do the same job for Knox. Hard to believe that they are not being paid.

A high court rules there was an "absolute lack of biological traces" of the American or her Italian boyfriend at the murder scene.


By Sky News US Team

Italy's top criminal court has criticised prosecutors over the flawed case against Amanda Knox and her ex-boyfriend for the murder of British student Meredith Kercher.

The Court of Cassation has issued its formal written explanation for the ruling in March which vindicated Ms Knox and Raffaele Sollecito in the 2007 killing of the 21-year-old.
It said there was an "absolute lack of biological traces" of either Ms Knox or Mr Sollecito in Ms Kercher's room at the apartment she shared in Perugia, Italy, with Ms Knox, or on the victim's body.
The high court also cited "blameworthy omissions of investigative activity" and said media furore was also a factor in the ultimately flawed case.

&lt;img src="http://media.skynews.com/media/images/generated/2014/1/31/285943/default/v1/meredith-1-206x155.jpg" class="image__item " alt="Meredith Kercher" /&gt;
Meredith Kercher, 21, was found in her Perugia apartment in 2007
The judges wrote: "The trial had oscillations which were the result of stunning flaws, or amnesia, in the investigation and omissions in the investigative activity.
"The international spotlight on the case in fact resulted in the investigation undergoing a sudden acceleration, that, in the frantic search for one or more guilty parties to consign to international public opinion, certainly didn't help the search for substantial truth."
Ms Knox, now 28, and Mr Sollecito, now 31, were declared not to have murdered Ms Kercher in the March ruling.
If the court had upheld the 2014 appeals court conviction of the pair, she would have faced 28-and-a-half years in prison while Mr Sollecito faced 25 years.
They have always insisted on their innocence.
Rudy Hermann Guede, from the Ivory Coast, was convicted in separate proceedings and is serving a 16-year sentence.
Five judges on the panel on the Court of Cassation found that while there were indications Guede may have had accomplices, the prosecutors' case did not prove either Ms Knox or Mr Sollecito was involved in the murder.
It also said that the lower court ignored expert testimony that "clearly demonstrated possible contamination" of evidence found at the scene and misinterpreted findings about the knife allegedly used to cut Ms Kercher's throat.

Dying Kercher 'Tried To Tell Me Something'

&lt;img src="http://media.skynews.com/media/images/generated/2016/1/22/442497/default/v2/rudy-guede-meredith-kercher-adaptive-comp-1-1-206x116.jpg" class="image__item " alt="Rudy Guede &amp;amp; Meredith Kercher" /&gt;
Rudy Guede described Miss Kercher's murder as 'heartbreaking'
The man convicted of killing Meredith Kercher has revealed her last moments - claiming he wrote on the wall with her blood as he tried to understand what she was telling him as she lay dying on the floor.

Rudy Guede, who is serving a 16-year sentence for the exchange student's murder, also claimed his innocence in an interview with Italian broadcaster Rai.
Speaking from prison in Viterbo, Italy, the 30-year-old told TV show Storie Maledette (Cursed Stories) about the moment he dropped everything in fear for Miss Kercher's life.

He said the bedroom had been staged to look as if a burglar had come in and a rock had been used to break the window.
He said he saw "an abundance of blood" and grabbed a towel from the bathroom closet to "staunch the wound in the neck".
"I cannot though ... it was heartbreaking," he said.
Guede, originally from the Ivory Coast,  said Miss Kercher tried "to tell me something" which he tried "to write on the wall with blood".
He said he "ran away because I was afraid they would not believe me".

Before the documentary aired, Guede opened a Facebook account using an image from the TV interview as his profile picture.
"Now I begin to tell my story," he wrote, before the interview was aired on Italian television.
The 21-year-old was found stabbed to death in the flat she shared with Amanda Knox.
Police always maintained Guede did not act alone and Miss Knox and Rafaelle Sollecito were later arrested and convicted.
The pair, who were partners at the time, were sentenced to 26 and 25 years respectively in 2009.
Two years later, the couple - who have always insisted on their innocence - were acquitted.
But a hearing in January 2014 reinstated their convictions only for a higher court to overturn the verdicts again in March last year.
Judges said there were "stunning flaws" in the case against them.
http://news.sky.com/story/1627699/dying-kercher-tried-to-tell-me-something

Documentary Amanda Knox looks at life of the 29-year-old American student twice convicted and twice acquitted of murder
Film promises interviews with Knox, her co-defendant and then-boyfriend Raffaele Sollecito and Italian prosecutor Giuliano Mignini
Knox and Sollecito were accused of murder her British roommate Meredith Kercher in Italy in 2007
Both of them were convicted but later had their cases acquitted
Trial began global speculation over whether Knox was guilty or not
After a second conviction and acquittal, she is now living back in the US
Netflix have released the first two trailers; Believe Her and Suspect Her

I remember all the blatant lies she told when she was in prison. I wouldn`t believe a word that woman utters - a deceiver par excellence. There`s something about her eyes that`s freaky.
_________________
The constant assertion of belief is an indication of fear.
Jiddu Krishnamurti