All round Liberal Democrat and friend of the McCanns admits that Cyril Smith confessed to him, and subsequently lied about it.

Is that a reputable site though?

Not that you can say that about the BBC and others these days but you know what I mean!

Freedom wrote:Is that a reputable site though?

Not that you can say that about the BBC and others these days but you know what I mean!

That's where it broke but it's since made all of the mainstream press. It's definitely legit.... which is more than can be said for the man himself.

Lord Steel of Aikwood, the former Liberal Party leader, never told a committee checking Cyril Smith’s nomination for a knighthood that the MP had admitted to him that child abuse allegations against him were true.

He denied “hiding his head in the sand” over claims against the MP for Rochdale and former party chief whip.

Lord Steel, 80, told the Independent Inquiry into Child Sexual Abuse yesterday that he confronted Smith over a report in Private Eye that he had smacked a boy with his bare hands and held the genitals of another youngster.

The incidents at a Rochdale hostel dated from the 1960s when Smith was a Labour councillor and before he became the Liberal MP for the town.

Lord Steel said he assumed that the Private Eye article was accurate. When he questioned the MP in 1979, he had said: “It is correct” and that he had been investigated by the police, who had taken no further action.
The peer, later a Liberal Democrat, told the inquiry: “He accepted the story was correct. Obviously I disapproved but as far as I was concerned it was past history.”

When he recommended Smith for a knighthood, Lord Steel said that it never crossed his mind to inform the honours committee about the admission because it was in the public domain through the Private Eye article.

He said if he had suspected that the activities had continued while Smith was an MP, he would not have recommended him for a knighthood. Lord Steel said that he never discussed the matter with anybody else, including party members.

Smith, MP for Rochdale from 1972 to 1992, is accused of sexually abusing youngsters at Cambridge House Boys’ Hostel in the town. He died in 2010.

Asked how he could have been confident that the MP was not still assaulting children, Lord Steel said: “He was no longer involved with the children’s home and indeed it had closed.”
Lord Steel said that he did not pursue the matter because Smith was not an MP or a member of the Liberal Party when the acts took place. “I did not feel I had any locus in it,” he added.

Lord Steel seemed to describe child sex abuse allegations against Smith as “tittle-tattle” during an appearance last June on Newsnight on BBC Two.

He said that he thought he was not talking about the conversation he had with Smith in 1979 but was referring to claims made in a book by Simon Danczuk, MP for Rochdale from 2010-17.


As father of four young children, a child victim of rape, I demand the arrest of “Lord” Steel on charges of failure to report a serious crime, aiding and abetting, perversion of the course of justice, corruption of the honours system. I demand his suspension from the Lords. #CSA


Excuse me? The former leader of the #LibDems Lord #Steel ADMITS that he KNEW #CyrilSmith was a child-rapist because Smith TOLD him so 7 years before Steel nominated him for a knighthood? Why isn’t Steel under arrest? Why is he still a “Lord”? This is astounding #CSA


There MUST be a criminal offence in this shameful shocking admission? #Steel should be stripped of the honours he so corruptly bestowed on the Child Rapist #CyrilSmith

What nice company the McCanns keep - not that we didn't know that already.

Freedom wrote:What nice company the McCanns keep - not that we didn't know that already.

Everything does seem to be coalescing. Galloway is correct - wilfully covering up child abuse is a serious matter for the Police to deal with; not a LibDem internal disciplinary issue.

Freedom wrote:What nice company the McCanns keep - not that we didn't know that already.

What's the saying about dogs, lying down and fleas.

Quite. David Steel should be more careful about the company he keeps.

Posts transferred from the topic about another McCann friend, Clement Freud.

unreorganised wrote:Quite. David Steel should be more careful about the company he keeps.

I get the impression he could be of that company, though. 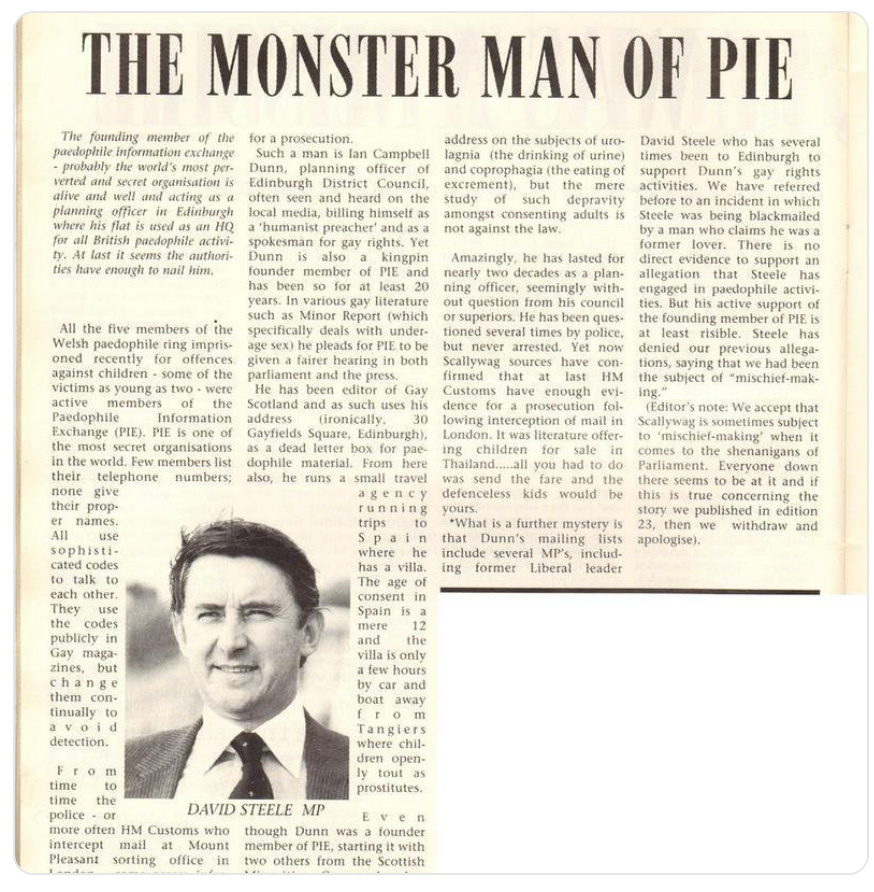 The illuminating - and quickly debunked by the Establishment - Scallywag magazine, again.

Its always after the fact it seems.


Truly vile crimes and a grotesque cover-up: MATT BAKER on why David Steel must be expelled by the Lib Dems for protecting paedophile Cyril Smith


No doubt lawyers are on it.


As the Independent Inquiry into Sexual Abuse prepares to publish its conclusions next week its report is believed to be highly critical of Steel for his failure to notify the authorities after Smith told him in 1979 that Private Eye’s reports about his sex crimes were true.