Oops! The Mail seems to have slipped up with the inclusion of the front page of an Australian magazine which has a story about Mr X.

I like the reference twice to someone's dismal, rather than dismissal.

Dismal is probably a good description of the article.

P.S. Note the lovey-dovey article on the right hand side about Mr and Mrs X. The Mail did the same thing with the celebrity couple when the news about them came out.

Is someone from the Mail reading this forum?

The story in the Australian magazine has now been pixellated out!!

The decision at last - we still won't know who they are!

Named in Scotland and the world over but has the right to anonimity here. Jatky2 feel this is important...why would some looking for a missing child wish to hide or to put it another way......what have they to hide...


A celebrity involved in a legal dispute to prevent his name from being reported in a story about alleged extra-marital activities has won a Supreme Court ruling.


The ruling means that media outlets in England and Wales remain banned from naming the individuals involved.

In a four-to-one majority ruling, the Supreme Court held that there was an "absence on present evidence" of "any genuine public interest" that would justify publishing the man's identity.

The court said that despite the story being accessible on the internet and social media, for it to be reported in English newspapers would lead to "potentially more enduring invasions" of privacy.

The individual, named in court hearings only as PJS, is married to a celebrity in the entertainment business and they have young children.

Sky's Afua Hirsch said that court concerns over the coverage's impact on the children was likely a "determinative factor" in its decision.

The justices said that there is "a qualitative difference in intrusiveness and distress between the disclosures on the internet which have occurred and the media storm which would follow from publication by the English media in hard copy, together with unrestricted internet coverage of the story."

In a summary of their ruling, they wrote that "publication in this form is contrary to the interests of PJS's children."

The man had asked the Supreme Court to consider the case after the Court of Appeal ruled last month that the injunction should be lifted
_________________
Success is not final, failure is not fatal: it is the courage to continue that counts
Winston Churchill

The award for best example ever of extracting the urine must go to Natalie Clarke and Claire Cisotti of the Daily mail for this Hello magazine type spread.

I wonder why the comments section was disabled in that particular article.

That must have been a difficult decision, Andrew!

There was also an article recently about the happy family life of the actor who had a fling with an escort girl.

This one about EJ and DF is likely to cause a worldwide shortage of sick buckets.

I didn't realise that the Elton garbage was plastered all over the front of today's DM.

Then on the Suns front page you have outrage at gagging order etc. 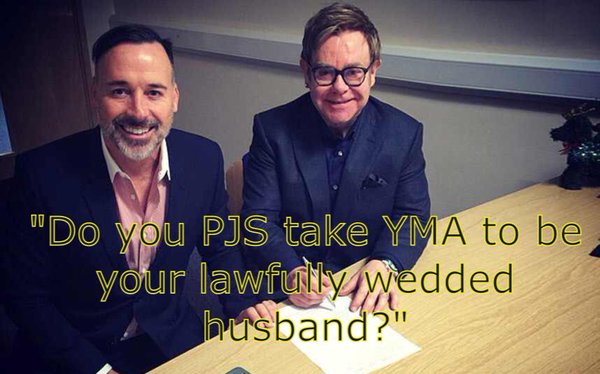 All from the Daily Mail too.

I'm expecting that bloke from Monty Python to appear at any moment to say STOP, THIS IS GETTING SILLY.

Yuk "on their second date they consummated their love" - how can this be right - sorry but sodomy is off the scale of acceptability in this world IMHO.

Those poor poor little boys. If anything, there should be an injunction merely to protect them.
_________________
The constant assertion of belief is an indication of fear.
Jiddu Krishnamurti

I gave up at that point - no problem with consenting adults but it's too much information.

I hate to read stuff like this regardless of the sexual orientation of couples, it's nobody else's business.

More garbage from The Mail today.

Is that because his name has been plastered everywhere around the world apart from England.

Many do not like the Sun,myself included but saw this on the Mail on line,so went along to the Sun on line.

I've transferred your post here Heisenburg though nobody is to make any assumptions that it involves anyone who has been previously mentioned!!

Here is the story in the Mail.

More tongue firmly in cheek stuff from The Mail: "picture-perfect family" - my elbow!

I'm not sure what this is about - the Sun on Sunday didn't name the couple.

Strange one and the Sun have not contested it?

I thought they complied with everything (In England and Wales).

Another yuck fest from The Mail.

I see that this case is to go to the Supreme Court.

I shall be so disillusioned if it is!

Maybe not - wouldn't it be PTS for Popeye the sailorman?

PJS (whoever he is, cough) has certainly been up to some eye popping escapades.

P.S. I've just read this article again from last year and the case has already been to the Supreme Court.