Just to add... Any termination between the Mc's and Metardo would have to have seen to look bad. Conflict / falling out etc...

The scam wouldn't work if they all parted ways as best mates, and rode off into the sunset.

Andrew wrote:Just to add... Any termination between the Mc's and Metardo would have to have seen to look bad. Conflict / falling out etc...

The scam wouldn't work if they all parted ways as best mates, and rode off into the sunset.

That's a very good point Andrew, something I would never have thought about (I've come to the conclusion that I'm very naive, with regard to making a missing child seem to be "abducted", I would be found out within the first 10 minutes!!)

Seeing as Medoto 3 (not sure of the spelling) seemed to be experts in money laundering not finding missing children it does make you wonder why they were taken on in the first place.......

A deliberate reason why they were taken on.

A few reasons, as posted above.

Will try and add more later.

I did add an emoticon, as I said the last sentence with tongue in cheek.  It's so very blatant though, isn't it.  I wonder if the Mcs never thought that they would be so intensely scrutinised not only on the internet but by any police looking for Madeleine and their greed got the better of them and it overruled their brains.

Was all about the money with the Mc's. Maybe not initially, but certainly within a few days.

This story is mentioned in the thoroughly misleading account by Anthony Summers and Robbyn Swann, "Looking for Madeleine". Only they tell an entirely different tale: one of the private investigation companies called in by the McCanns at the instigation of Brian Kennedy, Metodo3, came up with the story.

At first, M3 claimed that a lawyer called Correia and contacts in the criminal underworld in Spain had told them Madeleine had been killed by her abductors and the body dumped in this reservoir. they claimed the Portuguese police were disinterested in following the lead through.

A little later, after the first dives, M3 amended the story to add in the inevitable psychic who had visualised the dumping of the corpse. But it was on the level as criminal contacts had confirmed it, we're not telling fibs here, oh no...

S&S inform us that the divers found children's clothing and a sack of miscellaneous bones - which turned out to be not human in origin but of drowned cats and kittens.

so... who's right here? Same location, two different stories. Who might be deliberately muddying the waters with two variant tales, and why?  Especially since Metodo3, as I recall, turned out to be a bit dodgy; a bad investment for all those generous donations pouring into the McCann fund. The best part of a million went to this PI firm in return for not very much. 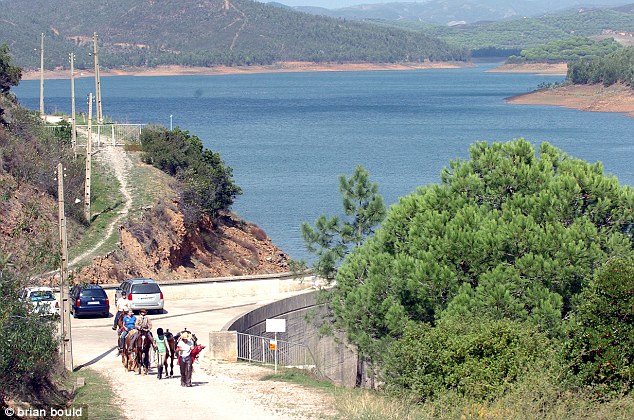 But that is not the same as the Barragem (Dam) de Arade:

…where the two searches by a team of divers, for Madeleine’s bones, took place in January and March 2008, see e.g. here:

It's easily recognisable because of the tower. Marcos Aragao Correia (see below) said that Madeleine's body could have been taken up there by her kidnappers and thrown in the lake.

So, TWO DIFFERENT LAKES in the media – the Arade Dam, in 2008, and now the Bravura Dam.

Possibly the single most important fact about the Arade Dam search is the fact that - as Marcos Aragao Correia, the lawyer employed to prosecute Goncalo Amaral for perjury on behalf of child murderess Leonor Cipriano, admitted in an newspaper article - he met two Metodo 3 investigators (boss  Francisco Marco and Antonio Giminez Raso) at the Arade Dam on 10 December 2007.

Metodo 3 were employed by the McCann Team via Cheshire businessman  Brian Kennedy.

Marcos Aragao Correia also said that he was employed by the McCann Team via Brian Kennedy and was paid by him.

Thus the searches for Madeleine’s bones were apparently arranged weeks beforehand by the McCann Team themselves.

I am surprised to see Tony posting here but the information he has provided appears to be of use.

I can't believe someone hacked into my account late last night and wrote a few obscene messages. Terrible stuff.

I've deleted the ones that I could see anyway.


I'm not sure if you're serious about being hacked, Andrew. It is happening a lot on Facebook.

No, it was just me logging on and typing stuff which I shouldn't of done after a few beers.

Andrew wrote:No, it was just me logging on and typing stuff which I shouldn't of done after a few beers.