I'm sure there was already a thread somewhere about this case but could not find it.

Says in the news today that police and sniffer dogs are to search an alleyway behind her home.

Surprised this wasn't done 6 years ago.

Hope her family get closure on this one way or the other very soon.

I was sure there was a topic about her too.

Very odd as was convinced there was also a previous thread as recall commenting on it.

Latest on Sky News re CL. Detective in charge standing in alleyway being searched [ again? surely done in the early days?] saying that the main road too obvious for a criminal who wanted access, the back alley was an obvious place to search.

He said what was said by the news presenter in the intro : those closest to her are not being honest, for whatever reason ,and if there are things to divulge they need to get in touch with the police. He stated this not as a suspicion but a certainty, so they clearly have some new info to go on, something they know maybe about her contacts and movements that day, for him to be so categorical in that statement.


The detective leading the hunt for missing York chef Claudia Lawrence has told ITV that he has already arrested one person for obstructing the course of justice' and will continue to arrest people if police "believe they're lying."


He said police were searching an alleyway behind Claudia's house for jewellery or any signs that she may have been there.

We've searched it before, but there's no harm in revisiting it.


Police are looking for a piece of jewellery from Claudia or anything that may give them a clue about the investigation.


Detectives investigating the disappearance and suspected murder of Claudia Lawrence are carrying out fresh enquiries and searches close to her home in York.

Father 'hits out at liars' - according to Sky News...

Hope I have got it completely wrong what I just thought.

Earlier I wrote on another forum [Mods delete, if you feel so], that - it's only a hunch and since the beginning, but - the father gives me the creeps :-(

Those Missing People photos of him and Katie Mac might start to look a bit uncomfortable.

I never understood how April Jones' mum allowed herself to become involved with all that.

I watched the Pólice Spokesman tonight saying that they don't think she ever walked out of her front door on the day of her disappearance but was carried out at the back.

I got an incredibly strong feeling that they know who they're after. 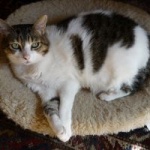 I hope you are too Andrew. It's so hard to think of and I haven't ever yet thought that. She was an adult, she never needed to be reported missing unless suspicious circs but it's clear I need to read more.

ETA. I think I know she was said to be seen, setting off for work and was never seen again. I'm sorry I'm so vague but wasn't she on CCTV on her 'last walk'?

Also, when I watched the Police Spokesman yesterday, his determination gave me hope. Good men trying their best - and then I remembered ...

From what I have read of the case, including the book that her father wrote, there was no sighting of her anywhere on the day she disappeared.

The last known confirmed action was around 8 on the previous evening when she phoned her mother.

I actually didn't know the father wrote a book.

Did he make much money out of interest?

Sorry, it's too early in the morning for me. Her father contributed to the book but didn't write it.

There was a head banging moment in it for me - words to the effect that it is a complete mystery what happened to Claudia, unlike the case of Madeleine McCann which was without doubt an abduction!!

Not come across that book either.

It's strange how Claudia's mother has been pushed to the background.


"It is Claudia’s father who has let off balloons in her memory and lobbied politicians. It is Mr Lawrence who will appear on television next week to publicise a new book called Gone by writer Neil Root — about ‘her father’s desperate search for the truth’.

There is no mention of Joan on the cover and Mrs Lawrence says she didn’t even know the book was being written — another upset to add to the many she has endured over the past four years.

‘In the beginning, Martin Dales did ask me if I wanted to make some input, but my marriage was not easy, and after it ended it took me a long time to rebuild my confidence,’ says Joan.

‘Every time I’ve tried to speak out I’ve felt there’s been some kind of emotional backlash.

‘Unlike Peter, I’m not academic. I find it hard to talk about Claudia. At times, rightly or wrongly, I have felt bullied into taking a back seat, but I have to do this now for Claudia."

I didn't know the parents had split up either.

I don't know much by the looks of it.

They were divorced before Claudia's disappearance.

They broke up 13 years earlier, per this article.

She and Madeleine have completely disappeared.

How can that be?

How could anyone evade forensics and the (adult) paper trail?

It's said that there's no perfect murder. How does anyone know?

Just read that the police are searching some out buildings and wasteland right next to her house.

Apparently never been searched before.

Sloppy police work if not.

Hmm, when I read this yesterday, my immediate thoughts were about the father. Maybe I've just become very cynical, but I've always had a bit of an issue with him. I seem to remember him trying to whitewash Claudia's private life, he didn't seem pleased when it was discovered that she had been dating a number of different men, including married ones.

I also seem to be having a bit of a brain fail, as I always thought it was assumed she went missing on her way to work, although the last CCTV images were of her coming home from work the previous day, so it was a bit of a "revelation moment" for me when the DCI announced that they believe she may have met her fate that night, in her own home, and then removed from the property via the back door.

I think the police know exactly who did what though, and I think it's the same as the McCann case, they've got to get the evidence before they can arrest and charge anyone imo

I must have brain fail too, susible because I was under the impression she disappeared on her way to work too.
_________________
Justice for Madeleine