The Mystery of Ben Needham

"This Morning" cancels interview with Kerry Needham with no explanation

In a disgraceful move, ITV's This Morning programme dropped a planned interview with Kerry Needham, mother of missing Ben Needham, at the 11th hour.

Kerry Needham wrote on her facebook wall at 22:10pm last night, of her plans to travel to London and appear on the programme with a view to promoting the search for Ben, who vanished on the island of Kos in 1991.

South Yorkshire police have been following several new leads following Kerry's appearance on a Greek TV station recently, and it was hoped that further information could come to light with the help of This Morning.

Having only been told that she could appear on the show an hour earlier, Kerry received a phone call from the editors of This Morning, cancelling the slot without any explanation. I might add that This Morning's facebook page is available for posts and comments, should people wish to express their feelings, the link is below.

Kerry Needham has never received anything like the same backing as Kate and Gerry McCann, neither financially, or publicity wise. This latest bombshell from ITV has only served to compound the stark reality, one rule for Kate and Gerry, and another rule for the parents of all other missing children in the UK.

That might, and does sound like a pretty bold statement, but it is true. The MSM have pandered to the whims and needs of Kate and Gerry McCann for far too long, so long in fact, and in the face of public unrest, that it is beyond sickening. I ask this:

WOULD ITV HAVE DROPPED THE McCANNS?

Not for as long as the earth still spins, so why treat others differently?

The McCanns have basked in self pity for eight long years. too often have we seen Kate and Gerry McCann appear on television, perched on their favourite sofas, Kate with her well practised look of a soul tortured by a terrible crime, the sighs flowing at each question before the previously prepared answers came. Gerry with his smug, "you'll never catch me" face, the constant shuffles and neck scratches as his whiny voice squeaked out the lies, perhaps due to Kate's grip on his broken codpiece, or just the fact his dishonesty constricts his vocal chords?

We've seen the same rehearsed play year after year. The sycophantic Lorraine Kelly for instance, playing the Uriah Heep role so brilliantly it turns the stomach. "Yes, aha, aww poor you", in her lowered fake tone, with, as usual no reference as to what Madeleine must be going through, and no reference to what she could have gone through in her final moments before the "Kate and Gerry show" first began over eight years ago.

Is it a bridge too far to do a service to a mother whose only wish is to discuss new leads, and to desperately hope new information might come of her appearance?

Sadly for Kerry Needham, and her son Ben, it certainly seems so.

Above, age progression picture of how Ben Needham may look today. If you have any information, that could help find Ben, or shed any light on his disappearance, please contact South Yorkshire police on: 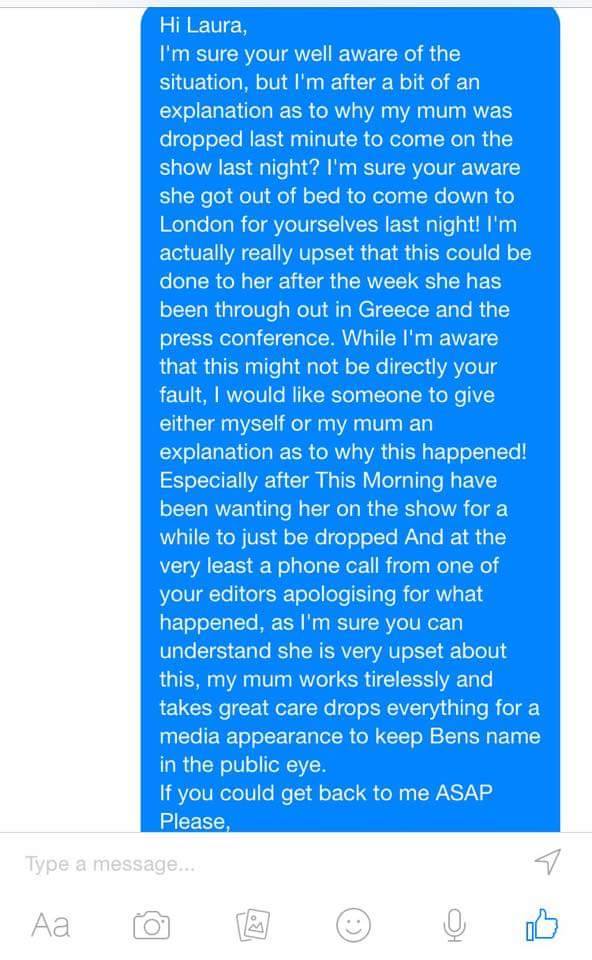 I really wonder if T.M thought they were on to something, perhaps  thinking B N might have been found and the rush to equate it with the McCann's case,as in   look after all these years we have   found him . So this is now not going to help their case it would only condemn them further if the McCann's were cited in the  planned interview and the media do not want that..Shocking 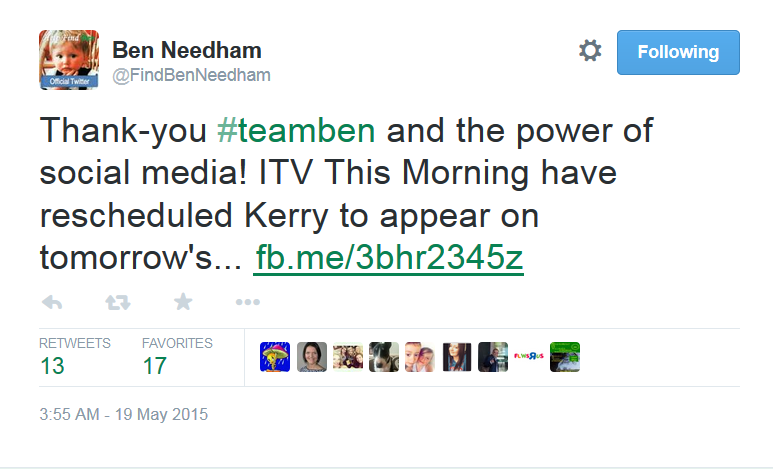 Good, wonder if she is restricted in what she says.


The mother of Ben Needham says the Prime Minister has refused to give her son's case the same financial backing as the McCann family.

Last month Kerry's MP Angela Smith asked David Cameron whether the Needhams could get similar funds as those given to the McCanns in the search for their daughter, Madeline.

In a written reply David Cameron says the National Crime Agency has supported South Yorkshire police, but made no mention of extra money for the Needham case. Kerry came into the Calendar studio and spoke to Christine Talbot.

Not fair is it , Crimes can now be solved many years down the line, so where are the ongoing investigations in this case. Who you are and who you know, totally agree.

Oh, that's excellent!
Been Tweeting like mad all morning, so glad to read this!

Brilliant! i'm sure that it's because of you and others like you tweeting that she'll be there tomorrow!

http://www.dailymail.co.uk/news/article-3087820/Ben-Needham-s-mother-dropped-ITV-s-Morning-favour-segments-Blinged-Babies-big-boobs.html
Twitter backlash after Ben Needham's mother dropped by ITV's This Morning in favour of segments on Blinged Up Babies and big boobs

About right for the way that channel is going

Did anyone see this interview today..

I was wondering about that, will have a flit through itv player

Would like to see it, so if can find a link that'll be greatly appreciated.

Will have a look also later on.

Eventually found it. Kerry and her mother were there and she is excited by the co-operation that the Greek police have given her and she has the help of Yorkshire Police who have a Greek officer who works for them. He is taking calls from the public and the YP are sifting through the info. She appeared on a Greek tv show with YP officers beside her and received hundreds of calls with info.
She is so grateful for the 700k allotted to her. YP brief her on any important matters but she is mindful that she doesn`t want to hinder their work.
Asked if she feels he is alive she replied yes as did her mum. Information has been given that confirms Ben was abducted. She also praised the YP team highly and said they were hand-picked and some had even volunteered for the job. One is due to retire and wants the case solved before he goes. They are confident and trust the police and are extremely grateful.
I don`t even need to draw comparisons do I?
_________________
Everything I write is my own opinion. Nothing stated as fact.

"information given that confirms the abduction"

They are more hopeful certain it was an abduction.  They have been asking the British Government for more funds for many years  Greek Police now working well with British police  .Phil Scofield said they had been on the programme so many times before . Given 700,000, a start ,lots of information coming in to Greek Police. Hopeful . Grateful to British public. Nothing about MM case. 01.00.01 itv player

"information given that confirms the abduction"

No Andrew she didn`t elaborate on that but I gather the police seem convinced by the info. She said something about it was maybe someone who knows who took Ben or witnessed the event.
_________________
Everything I write is my own opinion. Nothing stated as fact.

The Mystery of Ben Needham

Freedom wrote:So on the strength apparently of a hearsay report from an unidentified person, poor old Dino has been thrown to the wolves.

SYP know the money is coming to an end and needed an exit plan that doesn't smack of failure.
What better than to claim they have inside information about Ben's location and go through an elaborate excavation to find it.
When that proves fruitless they can say 'we've done all we can, we know his body is there even though we can't find it and we know who did it'.
They then chalk this up as a success and go home.

Who can prove otherwise?

They have to explain this part from the book though:

"But now building work had stopped there  for the day, and they could eat undisturbed."

Freedom wrote:So on the strength apparently of a hearsay report from an unidentified person, poor old Dino has been thrown to the wolves.

More like poor old Ben has been thrown to the wolves,we haven't a clue young fella what happened but never mind we've found a patsy,rip.

So the live update and 'final' police statement is in less than half an hour.

I assume it will be on the normal ITV Facebook link.

I'm extremely intrigued in exactly what DI Cousins is going to say...

Well I'm surprised it is a stand up conference at the farmhouse building site. Or maybe not...

They found a significant item that is directly linked to Ben on site 2. It was in Ben's possession at the time he went missing.

So they found something of significance belonging to Ben and directly linking it to him at site 2.

Won't say what it is and no further digging will be done.

I don't understand why they won't continue to search then if they are adamant that Ben is dead.

Was it those 2 car toys I wonder that disappeared with him...?

Not sure how finding that (or anything else) belonging to Ben 25 years later proves he died and that Dino was responsible...?

Andrew wrote:Was it those 2 car toys I wonder that disappeared with him...?

Not sure how finding that (or anything else) belonging to Ben 25 years later proves he died and that Dino was responsible...?

Nor me. Could it be something to do with the sandals?