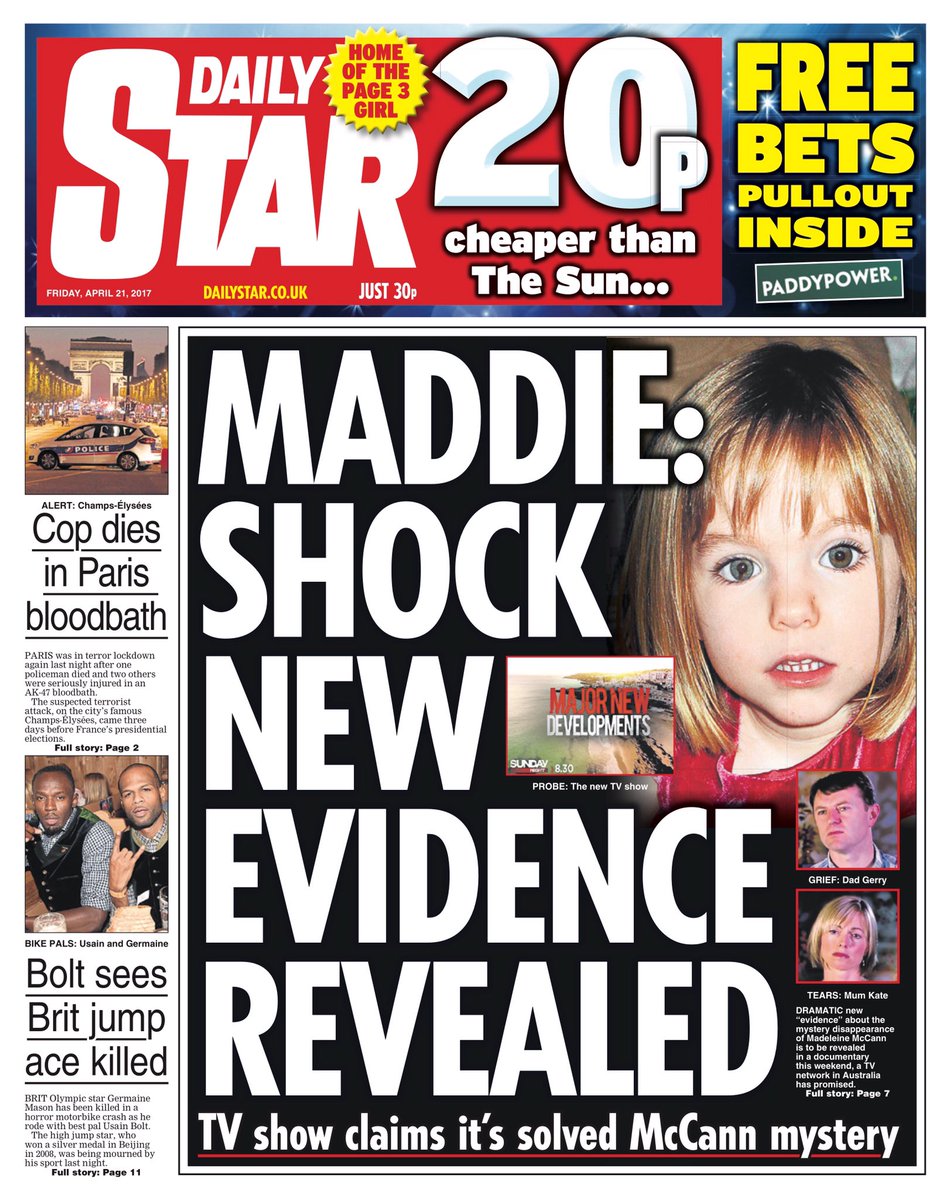 Presumably this is the Australian show with Pat Brown and others?

There is an email over the way from Pat Brown, in it she states to TB that she has no idea what this new evidence is, and she is worried that her hour long contribution may be heavily edited and censored. By the sound of it, it sounds like it is going to be the usual we have come to expect, so I don't hold out much hope...
_________________

This is on the Pat Brown FB page.

Also from Facebook in case it can't be accessed by everyone.


Here are my thoughts about the upcoming Sunday Night show
I was contacted by Rahni Sadler to do an hour long interview with her on the case. Coming on the heels of the recent spate of good Australian media coverage of the case, I consented to do the interview. I was led to believe this was a one-on-one interview, an in-depth interview that would not be edited to any extent. I had no idea that I was going to be but a piece of some "explosive" documentary which was only going to include bits and pieces of what I said.
Had I know this, I would have refused the interview. I rarely do media interviews anymore that are not live interviews unless I am fairly sure that my views are going to accurately represented. This is especially true with the McCanns as we all know how litigious they are.
Also, I don't normally do documentaries without a contract and pay. However, since I thought this was a sit-down in-depth interview about the McCann case and because it seemed we were finally getting the truth out to the UK and the world, I consented to do the show and to do it for no remuneration.
I am not sure this was a wise move. I have already seen that clip in the promo and I did NOT say the McCanns were lying and that they were concealing guilt. I would NEVER make such a blatant statement. First of all, as a profiler, what I say is "evidence supports" or "my theory is " or "my best analysis is", etc.
So, Sunday Night has already, by editing out what I said prior to that statement, set me up for accusations of slander by the McCanns (I am not sure why their legal team has allowed this). This leads me to be concerned about the entire intent of the program. I was expecting the show to be a very measured discussion of the case, but I fear we may simply be looking at a ratings grab of a show. I know of NO new evidence or that anyone from the Australian show has "solved the case." While it appears that this show may be allowing us to speak up about the McCanns (which is fabulous) and allowing us to finally publicly air what evidence there is (and in a major media production), I am not sure what else this show is going to be about. My greatest fear is that they are going to use us naysayers as dramatic bait and end the show with some "evidence" that Madeleine is alive and still has hope of being found.
I am crossing my fingers and hoping the show won't only be about getting great ratings, appeasing the McCanns, and setting a bunch of us up to be sued. I am hoping someone who put this show together actually cares about truth and justice. But, nothing would surprise me.....
Pat

I see dear Verdi thinks Pat is behind all this

Is there anyone that woman/man doesn`t besmirch ?

I see that Pat is aware of Verdi!

"First of all, I hardly have such great media control that I can get an Australian network to do my bidding as Verdi seem to think!"

Is Pat Brown's email in response to the Daily Star piece then? How did she find out about it?

Also she repeats the claim about the Mc's being litigious. I had to challenge this somewhere else the other day when somebody was reluctant to discuss things. It's a carefully crafted image, sure, but how many people have they actually sued? I see stuff on forums all the time that makes me cringe yet it is allowed to go unchallenged. I've doubtless been guilty of indulging in it myself before now. Have I experienced any kind of legal censure? No.

Bang on Un-re......any contact people in the "not" McCann camp have with MSM appears to end in disaster funnily enough....as Cristobels appearance in the Sun will confirm......why do they do it??  Good point about Pat and litigious (not!) Macs as well.....whatever we can expect the resolution for Madeleine will be the last thing to come out of this venture......
_________________
Success is not final, failure is not fatal: it is the courage to continue that counts
Winston Churchill

Lots of articles about this in the MSM. Mirror, Mail, Metro, Sun etc.

Can't bring them over as on phone and too much mither.

Maybe somebody else can kindly do so.

This is laughable, they won't hand in evidence to police until after show is aired WTF!!!! Total madness

I'm sure OG could rustle up some kind of international instrument that would focus their minds. IF any of the parties in this fiasco actually gave a toss.

candyfloss wrote:This is laughable, they won't hand in evidence to police until after show is aired  WTF!!!! Total madness

It doesn't make sense to me.

Pat isn't naive, she understands the way the media can selectively edit an interview to portray it in any way they wish and she's already had her fingers burnt by the McCanns when she published her book.

Her career depends on her reputation so, even with an apparently sympathetic film crew, I can't understand why an old hand like Pat didn't insist on a final veto of the footage of the segments of her interview that would be screened as part of the show.

This must be more game playing as the wider Team Mc Cann gets more and more desperate.

Thinking about what the new evidence might be, I wonder if it is something that's come from GA? Some of his recent theories - like the "coffin" one - seem somewhat unfounded to me and more along the lines of things that should have been ruled out and weren't rather than anything concrete.

unreorganised wrote:Thinking about what the new evidence might be, I wonder if it is something that's come from GA? Some of his recent theories - like the "coffin" one - seem somewhat unfounded to me and more along the lines of things that should have been ruled out and weren't rather than anything concrete.

You're thinking about the new evidence as someone who is familiar with the case. Since the majority of viewers won't have any in-depth knowledge, the new evidence could be something we already know such as the dogs indicating the McCanns belongings or the shutter not being jemmied.
_________________
Justice works in silence.

bluebell wrote: I thought withholding evidence was a criminal offence?

As is interfering with a police investigation, but once again it only applies to Joe Public.
Any paedos died lately with no relatives to give them an alibi.
The only good thing that has come out of all this so far is that it shows the power of the media to change opinion. The British press, no it's not, seems to me (IMO) to be a propaganda machine. NSY more like clueless of the back yard.The Portuguese are making them look stupid, and succeeding.
Evidence of a cadaver being present in an apartment and yet NSY haven't looked into it, ignoring evidence?
" Sir there's a great deal of evidence that there was a body in that room." NSY's Finest " I Know but there's no clues to who it could be, if only somebody would come forward, or if there was somebody missing we may be able to crack the case."

unreorganised wrote:Thinking about what the new evidence might be, I wonder if it is something that's come from GA? Some of his recent theories - like the "coffin" one - seem somewhat unfounded to me and more along the lines of things that should have been ruled out and weren't rather than anything concrete.

A few month back I was in contact with a couple of Aussie journalists and urged them to investigate and examine "The last photo" and the history of "the make up photo".
Anyway, if this new evidence gonna show what happened to her it have to show, without any doubts that she is dead or alive.
I hope I'am wrong here but I'am very sceptical that they have this kind of conclusive evidence.
Maybe they cooperated with Birch on Murats driveway.

Someone posted on Facebook that "Sunday Night" is a tabloid show so she won't be watching it.

Yeah, apparently that was the part of the misrepresentation. I was told Sunday Night was a public affairs show by Rahni Sadler. Public affairs to me is a serious show. I should have done more homework but I was in a busy week and this came up very quickly.

So has Pat Brown been set up to fall because she is rather close with her thoughts on smithman?
Also don't forget a spokesman was out there and had the ear of the media some time ago.

Heisenburg wrote:So has Pat Brown been set up to fall because she is rather close with her thoughts on smithman?
Also don't forget a spokesman was out there and had the ear of the media some time ago.

He must be helluva speaker to convince so many to toe the line...i realise im in the minority on this ....but i see all these things as set ups....from the Sun article through to Pat Brown. Set up to fail...or Pat jumped as part of a team??
Who knows its just games....anyway how is OG getting on any news yet????
_________________
Success is not final, failure is not fatal: it is the courage to continue that counts
Winston Churchill