Not a celebrity but a victim of a terrible crime - her face became known to all. 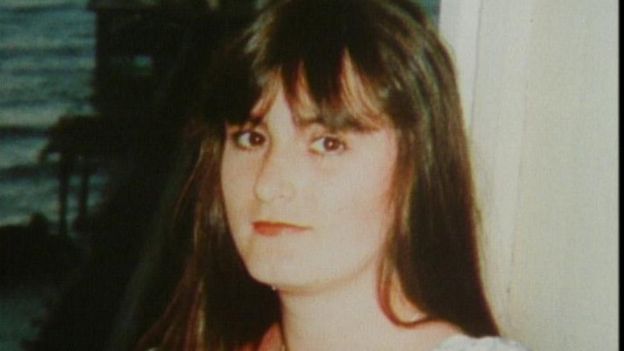 Stephanie Slater, the estate agent who was kidnapped and held captive for eight days in 1992, has died of cancer aged 50.
Ms Slater was held in a "cramped wooden coffin" after she was kidnapped by Michael Sams.
Sams posed as a house buyer to kidnap Ms Slater in Birmingham. She was freed after her employer paid a £175,000 ransom.
Ms Slater moved to the Isle of Wight and went on to help kidnapping victims.

Sams, from Sutton-on-Trent in Nottinghamshire, was jailed for life in 1993 for kidnapping Ms Slater and for the kidnap and murder of Leeds teenager Julie Dart.
Sams, now 76, was caught after his third wife recognised his voice from a clip played on BBC's Crimewatch.
Ms Slater was 25 and working at Shipways Estate Agency in Great Barr when she was kidnapped.
She was gagged and driven from Birmingham to Sams' workshop in Newark.
She was put in a wooden box inside a wheelie bin where she was handcuffed and had electrodes attached to her leg.

Ms Slater spent her life working with police forces to improve treatment of kidnap victims and also with victims to help them overcome their experiences.
She wrote a book, Beyond Fear: My Will To Survive, telling of her time in captivity which she hoped would help others better understand the point of view of female victims of violence.
Her best friend, Stacey Kettner said: "I know that she never truly got over the events that changed her life so dramatically in January 1992.
"It's been an honour and a privilege to be Stephanie's best friend."

This is a weird one; I'll put it here to see if anyone else has heard the story.

A couple of people on Facebook are insisting that the former child star Mark Lester died last year. I've even been given the date of his supposed funeral, 20th September 2016, in Australia - which seems very unlikely, not to mention that the media hasn't reported his death.

Has anyone heard anything about this?

P.S. Not to worry - somebody had "done a Smith" and picked up the funeral details of a different Mark Lester.

Not a celebrity death as such but very nasty and bizarre

Another one who had a good innings.

Going back to Jerry Lewis, his sons aren't likely to be pleased at being cut out of his will.

I've never followed Coronation Street but I have heard of Liz Dawn.

....and another one. A Coronation Street link as he was once married to Pat Phoenix.

Tony Booth - Cherie Blair's father but I tried not to dislike him for that! I remember him as Alf Garnett's son-in-law in Till Death Us Do part.

P.S. I think he actually appeared in Coronation Street too.

Good old accurate journalism (?) - she wasn't at the house where the murder took place.

.....and other one, they're popping off like rabbits - you'll understand the bad joke when you see who this one is.

I've not heard of this chap before but it seems that we have him to thank for the gay Muslim story about Barack Obama.

Here`s my favourite, Learnin` To Fly at the IOW recently.

He was briefly in this group which I liked.

Mind you he never looked a well man. At one time, when with Bob Dylan and The Band, he wore an undertaker`s hat and looked really cadaverous.

There are now some doubts about the news!

P.S. Name dropper as I am, I'm in contact with Roy Orbison's son on Facebook and I'm waiting to see if he has any more news.

Sadly the news has been confirmed

I remember him from Never Mind the Buzzcocks.

A good innings for this one.