What a very sad story.

Shane Galliers was hit by a wave while saying farewell to sister Michelle, who only passed away in November 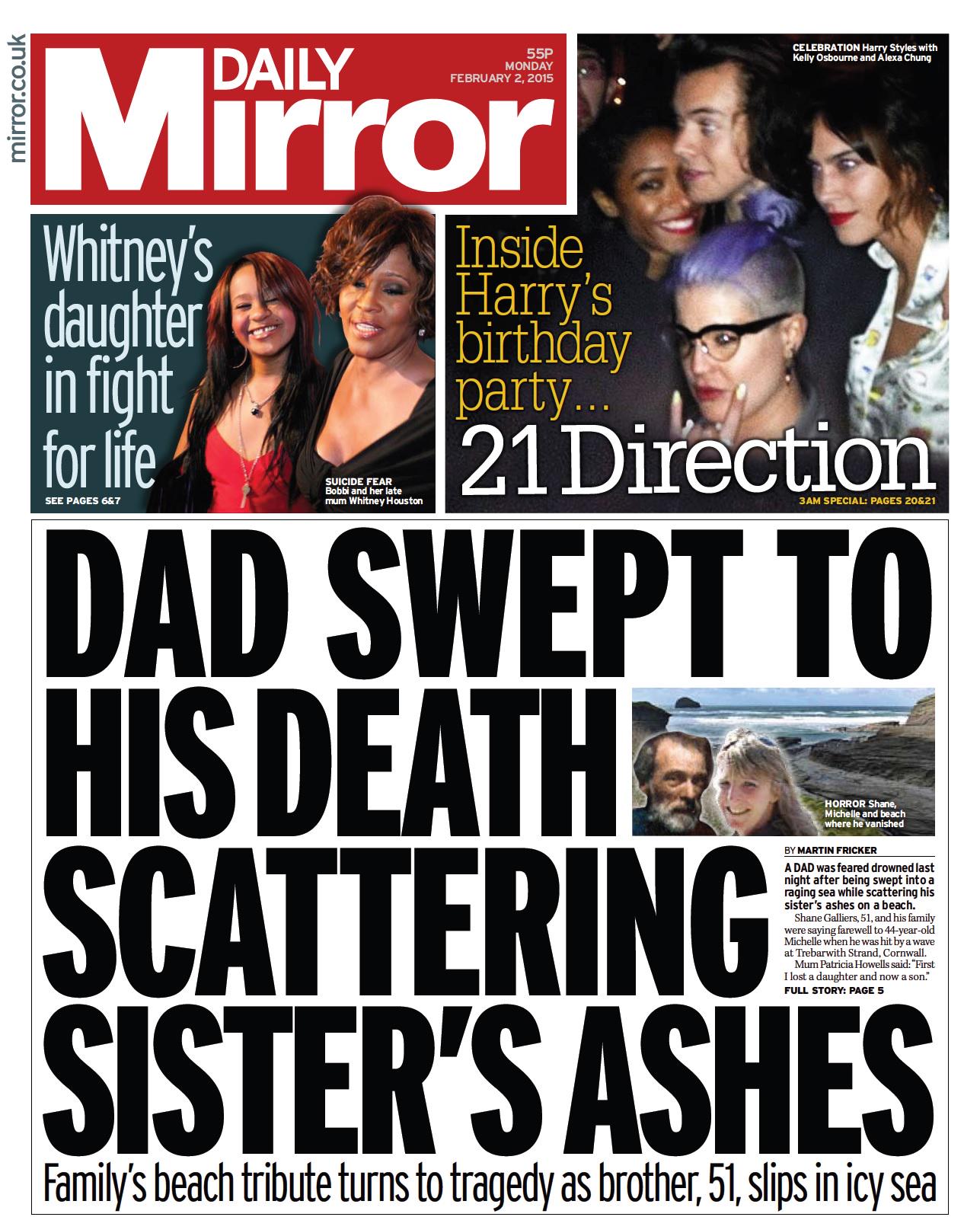 How sad indeed. Life can be very cruel, some people have so much to bear in the way of sorrow.

A terrible story which is just breaking.

It's dreadful , as they were a pensioners group on an excursion I would imagine there won't be a family in the area unaffected , some probably more than once .

A 3 year old boy was one of the victims.

Chloe Godding, two, had got straight back up after the fall and went to bed seemingly okay.

But her mother Lucy, 33, later found the two-year-old lying face down unconscious on a blood-soaked pillow.

The qualified nurse desperately tried to resuscitate her in the living room of the apartment while Chloe's dad Nicolas, 36, rang for an ambulance.

A passing English trainee doctor heard the couple's calls for help and came to their aid and helped with the chest compressions.

By the time she arrived at hospital after a lengthy 30 minute wait for an ambulance her parents were informed Chloe had died.

Mrs Godding told an inquest at Winchester Coroner's Court today how she checked Lucy over after the fall but there was no sign of injury.

She said: "She was straight up at that point.

"She was not red at all, there was no bump or anything.

"I think she would say if she was hurting."

Family/Solent News & Photo AgencyChloe GoddingChloe: The toddler showed no signs of being hurt after the fall
Later that evening, the inquest heard she behaved normally, eating dinner and reading a book before going to bed.

Lucy, from Chandler's Ford, Hampshire, put her daughter to bed and checked on her at around 9pm and found her snoring.

But when she checked on her again at 10.30pm to kiss her children goodnight, she described a smell of faeces coming from Chloe's bed.

She said: "She had never opened her bowels sleeping.

"She was still lying face down but she was looking really uncomfortable.

"Her face was straight down in the pillow.

"My husband sat on the bed and tapped her on the shoulder, and she didn't move.

"He pulled her left shoulder up, her face turned over and I just saw approximately 20cm of blood on her pillow.

"Her eyes were closed but there was blood around her nose, and her lips were blue.

"I grabbed her and ran into the living room to begin trying to resuscitate her.

"It all seemed hopeless.

"I picked her up and ran along the corridor screaming at people, saying 'help me please, help me'."

A coroner was today unable to give a definite cause of death for the youngster, who died on May 8 this year in the seaside resort of Albufeira.

A Portuguese pathologist ruled she died from a severe head injury following a blow to the back of the head, but Dr Samantha Holden, who carried out a second autopsy, found little evidence to support this finding.

The blow was also not consistent with the way Chloe fell forwards, Winchester Coroner's Court heard.

Dr Holden said: "My belief is Chloe's death wasn't as a result of any trauma.

"It would be unusual without seeing a skull fracture or severe hemorrhage, which was not described in the initial post mortem report.

"Even after she had fallen she was acting quite normally."

Her autopsy found Chloe showed early signs of bronchopneumonia on her lungs and sepsis, but she couldn't definitely say this caused or led to her death.

"Chloe was an apparently healthy two-year-old girl on holiday with her family.

"She wasn't showing any signs of illness but was a bit tired.

"It appears to me this was an accidental slip of some kind, but precisely what happened is unclear.

"But upon hearing the evidence there is nothing to conclude that Chloe fell backwards and struck the back of her head in the way that seems to have been identified by the first post mortem."

He added: "Chloe Godding died due to an unascertained medical cause at around 5.30pm.

"I cannot think of anything worse than a death of this kind in the family.

"I can only give you my sympathy.

"It's very unfortunate we haven't come to a clear cause at the end of it."

After the inquest, heartbroken mother Lucy paid tribute to Chloe.

She said: "Chloe will always be our beautiful daughter, she was always smiling and a lover of life.

"We are obviously devastated that Chloe is no longer here with us and miss her every minute of every day.

"In such a heartbreaking and life changing tragedy, we try to take comfort in the fact that every day of Chloe's life was a happy one for her.

"She woke up every single day smiling and went to bed each night happy.

"She never had any worries in the world and was totally adored by her whole family.

Incredible parallels. Poor little girl, my heart goes out to her parents.

It's in the Mail and elsewhere too.

How dreadful for the parents.

Tragic death whilst playing on a sofa.

The babe in question was only 16 months old,but it seems as if he got trapped behind a sofa.

What a tragic story this is.

What a terrible tragedy,it seems the parents thought the twins were inside,didnt realize they had gone out.joyce1938

Recovery teams are searching a lake near Florida's Magic Kingdom Park after the animal dragged the boy into a man-made lagoon.

Police are searching for a child who was snatched by an alligator near Disney's Magic Kingdom Park in Florida.

The two-year-old boy was paddling in a foot of water on a beach beside the Seven Seas Lagoon at 9pm when the animal attacked and dragged him away.

Orange County Sheriff Jerry Demings said: "The father was there nearby and the alligator came up and attacked. The father struggled and tried to get his son and was not successful and he alerted others nearby to assist him."

The mother also tried to rescue the boy and a nearby lifeguard was told of the attack, Demings said.

"We have in excess of 50 law-enforcement personnel at the scene actively searching the lake," he added.

"As a father and a grandfather, we are hoping for the best in the circumstances but, based upon my 35 years of law enforcement experience, we know we have some challenges ahead of us."

Police have cordoned off the area near the Grand Floridian Resort & Spa while boats and a helicopter search the 14ft-deep man-made lagoon which is bordered by three holiday resorts and sand beaches.

Disney spokeswoman Jacquee Wahaler said everyone at the resort was devastated and that Disney is helping the family.

When asked if the resort was aware of alligators on the property, Ms Wahaler advised there were signs that said "no swimming".

Sheriff Demings said there had been no other recent reports of similar alligator attacks on the lake.

"We have no record of this happening before," he said.

It is not clear if the child's family, who are from Nebraska, were staying at the resort.

Magic Kingdom Park is one of four theme parks in the Walt Disney World Resort.

This is dreadful beyond words.

I know. I was halfway through my breakfast when I switched on the news and they were reporting it. I felt physically sick and couldn't eat another thing.

Oh how terrible. Poor poor child, poor family. How can something like this happen?

What is Disney's Magic Kingdom, I know nothing about Disney's theme parks?

I know alligators are found all over Florida, but it seems strange that one would be allowed to be anywhere near a theme park. This was a man-made lagoon, so how would it get there?

froggy wrote:I know alligators are found all over Florida, but it seems strange that one would be allowed to be anywhere near a theme park.  This was a man-made lagoon, so how would it get there?

Yeah it beggars belief that alligators would be allowed to roam in a man-made lagoon at the biggest theme park in the world.

I did read somewhere (not sure where) this morn, that once they get over 2ft in size then they are removed out of the lagoon.

So does that imply that alligators of that size or less are harmless or did one just escape the net so to speak.

I took my kids to Disneyworld back in 1993. There were notices in the villa about alligators and the fact they can enter built up areas and man made lagoons. Needless to say we certainly didn't tempt fate.
_________________
Everything I write is my own opinion. Nothing stated as fact.

Tragically, he has been found dead.

It's on the front page of tomorrow's Mirror.