The murder of JonBenet Ramsey

That wasn't confirmed Chatelaine but there were similarities.

The interview which was posted recently where she denied that similar writing on family photos was hers was a real eye opener!

Yeah the documentary on the other page from Cristobell's blog that Candyfloss posted is a very good one.

Freedom wrote:That wasn't confirmed Chatelaine but there were similarities.

The interview which was posted recently where she denied that similar writing on family photos was hers was a real eye opener!

***
As I remember it, it wasn't just her handwriting, but also the use of words.

Wow is all I can say. Fancy that. Interference in how a police investigation was conducted. Just puts me in mind of another case where good honest cops have had their hands tied. Wonder if one of them will become the equivalent of Steve Thomas.
_________________
Everything I write is my own opinion. Nothing stated as fact.

Shoddy shoddy journalism! It repeatedly says Burke was 9 when interviewed in 1998 when that's how old he was two years earlier at the time of the murder.

Why on Earth was he not interviewed as soon as possible after the event?

This sounds an interesting programme; perhaps the team behind it might like to turn their attention to another strange case that happened just over 10 years later!

Oh okay, I only have Freeview.

There Are 5 Separate JonBenét Ramsey TV Projects Coming This Fall

Here's what you need to know about each of them.


Six-year-old pageant queen JonBenét Ramsey was found dead in the basement of her family's Colorado home on the morning of Dec. 26, 1996. Despite the extensive police investigation, multiple grand jury hearings, and the hysterical public response, her murder remains unsolved. So, with the 20th anniversary of Ramsey's death rapidly approaching and interest in true-crime television peaking, a bottleneck of small-screen attention was probably inevitable.

The five projects are shaping up as fairly distinct – one's a scripted Lifetime movie, while the three docs are each promising different exclusive access to footage, interviews, and new evidence. As yet, it's unclear whether any will tackle the internet's stranger-than-fiction conspiracy theory that Katy Perry is secretly JonBenét (but maybe that's where Dr. Phil comes in).

If you're a completist, you're probably going to have to binge the whole bunch, but here's a quick rundown of what to know about each show:

1. The Killing of JonBenét: The Truth Uncovered (A&E)

A&E's two-hour documentary is the first of the four TV projects to air and features footage from a 1998 interview with JonBenét's brother Burke Ramsey's, which has never been aired publicly before. Recorded by the District Attorney's office, the tape sees Burke give his account of events from the day JonBenét died and will be accompanied by analysis from a child psychologist. The doc also includes a new sit-down interview with JonBenét's father John.

Distinguishing feature: That Burke Ramsey interview tape is a biggie, especially in light of the fact that Burke will be giving his first public interview to Dr. Phil a week later.

This case couldn't possibly be any more in Dateline's ballpark, so it's only a surprise that it took so long for their special to be announced. This two-hour report will feature new interviews and "never-before-seen case documents".

Distinguishing feature: Includes the first-ever TV interview with the 911 operator who took the call from JonBenét's mother, and from two of the Colorado police detectives who were involved with the case, Jane Harmer and Tom Haney.

A three-night event series executive produced by the Weinstein brothers, An American Murder Mystery will re-examine key evidence and the case timeline. ID president Henry Schleff has promised a "provocative" take on the mystery of what happened to JonBenét: "The fact is, we may never definitively know the answer to that question — but we will re-explore every angle, every shred of evidence, and every 'whodunit' theory to allow our viewers to draw their own conclusions on the case."

Distinguishing feature: Some exclusive interviewees, including investigator Gordon Coombes, who worked for the Boulder City District Attorney's office during the case, investigative journalist Diane Dimond, who covered the case from the start, and former Colorado detectives Bobby Brown and Steve Pease.

4. The Case Of: JonBenét Ramsey (CBS)

A six-hour, three-part "docu-thriller" event series that sounds close in concept to HBO's nightmare-inducing The Jinx. The Case Of (previously titled Case Closed, just for extra confusion) reunites the original investigators from the murder case — including forensic experts, former police officers and now-retired FBI agents — to conduct new interviews and re-examine key evidence using new technology. The extensive trailer gives a pretty good sense of the Serial-level obsession you may be in for here.

Distinguishing feature: The Case Of… will be an ongoing anthology series at CBS, with future seasons delving into other unsolved or mysterious cases.

Nope, it's not just you – that is the same title as the Dateline special. This original Lifetime movie has assembled a strong cast of TV "That Guys," including Mr. Robot's Michel Gill as JonBenét's father John Ramsey, and Ray Donovan's Eion Bailey as lead detective Steve Thomas, who was famously convinced that JonBenét's mother, Patsy (Julia Campbell) committed the murder. The movie will take a fresh look at the events of Dec. 26, 1996, and the competing theories about the murder.

Distinguishing feature: The only scripted project of the bunch. JonBenét and her family have seldom been portrayed by actors before — save for a couple of TV movies in the early 2000s — making this a hook in itself. Newcomer Payton Lepinski will play JonBenét.

candyfloss wrote:This was widely advertised as being on tonight yet I cannot find it on the programme schedule?  Does anyone know?

Just read it on twitter it's on Crimewatch tonight at 9pm Candyfloss, best to check though.

eta. Crime Watch daily with Chris Hansen, I can't find it listed either.

It's not on Crimewatch UK Costello I don't think.  It looks like they have moved it now to next Monday at 10.oo pm 19th Sept, on Investigation Discover Channel.  Go forward to the 19th Sept date on the top line..

Yes you are correct Candyfloss. Isabelle McFadden has a small clip crimewatchdaily on #mccann, unable to copy it, this must be another programme.

This was on American TV last night, there is a short video clip as well on the link of part of the interview with the brother....


'Why is he smiling?' Murdered JonBenet Ramsey's brother Burke speaks for the first time about what happened

The brother of murdered JonBenet Ramsey has spoken out for the first time and his demeanour has been considered alarming by TV viewers.
The first instalment of the three-part special for Dr Phil aired on Monday, and some viewers were left troubled by 29-year-old Burke's body language while speaking to the show host.

During the sit-down interview in the home where JonBenet had been violently killed 20 years ago at Christmas, Burke explained why he chose not to speak publicly until now.
“For the last 20 years I wanted to grow up like a normal kid,” a smiling Burke said. 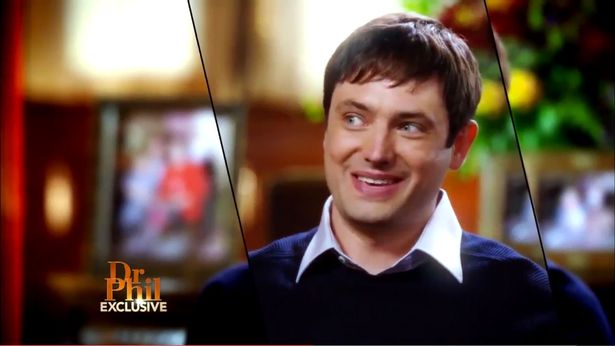 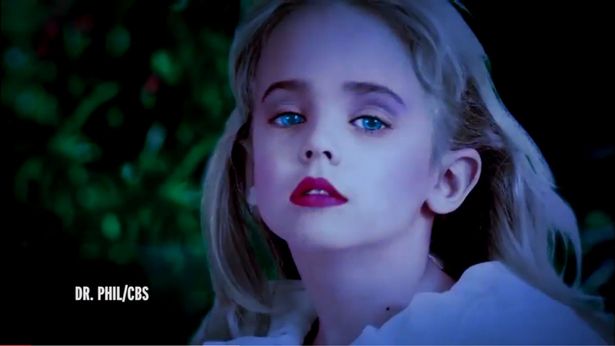 JonBenet was six-years-old when she was murdered
He insisted that he had not hidden from media but was “sceptical” about what it would lead to.
Burke, who agreed to a “no holds barred” interview without a lawyer present revealed that he had never read the two and a half page ransom note that had been left at the scene of the crime.
“I don't think I've read the whole thing. But I've definitely seen pictures though,” he said.
His mother Patsy, who died in 2006 after a battle with ovarian cancer, was accused of writing the lengthy note which she found on the bottom of the stair case on Boxing Day in 1996.

“The first thing I remember is my mum bursting into my room, really frantic saying 'Oh my gosh, oh my gosh, oh my gosh',” he recalled.
Despite hearing his mother 'freaking out', Burke chose to stay in bed while the commotion continued even when a police officer came in with a flash light.
“I just laid there, I didn't know what else to do,” he said. 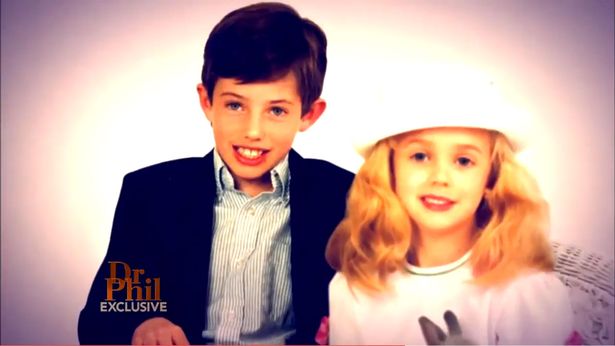 Burke Ramsey on Dr. Phil
After Dr Phil raises questions about his 'odd' response to his mother bursting into his room looking for JonBenet, Burke replied: “To be fair I didn't know it was a police officer.”
“I guess I like to avoid conflict,” he said as he laughed nervously.
“I guess I felt safer there. I'm not the worried type. There's a part of me that doesn't want to know what's going on.”
Burke went on to explain that his reaction was because he was “scared” and he wasn't sure if a “bad guy” was still in the house.

“Why is Burke Ramsey smiling talking about the murder of his sister Jon Benet? #drphil ,” one viewer tweeted.
While another added: “Jon benet Ramsy's brother Burke is creepy he reminds me of Elijah Wood's character Kevin in Sin City.”
Speaking to Today last week, Dr Phil admitted that viewers may find Burke to be 'odd'. 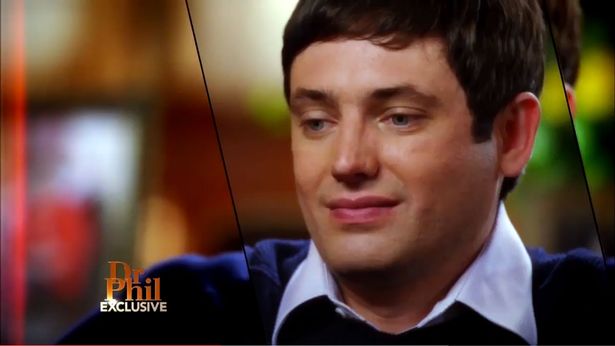 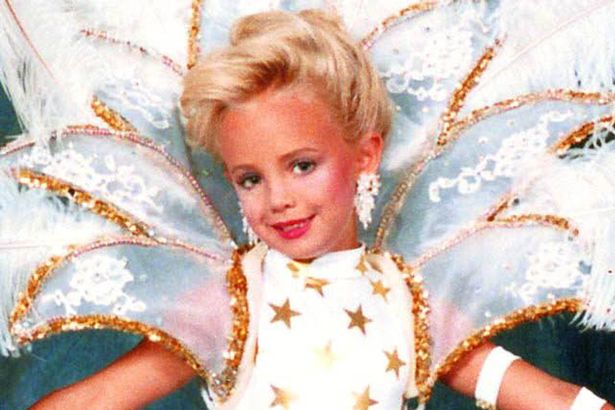 JonBenet was found murdered in the basement of her home

"For 20 years he has been off the grid," he said. "And my impression is he's socially awkward."

I don't know about atypical behaviour - there have been so many recent instances of relatives of crime victims looking and acting as if it's the best thing that's ever happened to them.

At least Burke is talking nearly 20 years after the event.

The latest from the Mirror on this:

A chilling new docu-series evaluating evidence from JonBenet Ramsey's murder has presented evidence to suggest that the beauty queen's mother could be linked to the ransom note found at the murder scene.

Hardly new and hardly shocking though.